Can biometric identification technology, such as fingerprinting, encourage borrowers to repay their loans and enable financial institutions to grant more loans to creditworthy applicants, reducing the costs and risks of lending? In Malawi, researchers analyzed whether fingerprinting borrowers from a microfinance institution would have an effect on repayment rates. Using fingerprinting for loan enforcement increased repayment by 40 percent among Malawian farmers with the highest default risk.

Formal banks rarely serve the rural poor. Microfinance has filled part of this gap, but lenders’ ability to keep costs low and continue extending credit to the poor depends in part on their ability to encourage repayment from borrowers who typically lack adequate collateral or verifiable credit histories. Lenders may use “dynamic incentives,” such as the promise of larger loans or the threat of future credit denial, to elicit timely repayment and lower lending costs.

These dynamic incentives, however, work only when borrowers can be consistently identified. In countries lacking formal identification systems, borrowers may avoid sanction for past default by simply applying for new loans under different identities or from different institutions. This can raise the cost of lending by allowing for more default, and the response of many lenders has been to limit the supply of credit and increase its price, which affects many creditworthy smallholder farmers who cannot finance crucial inputs such as fertilizer and improved seeds.

The evaluation took place in Malawi, where rural areas are home to over 85 percent of the country’s population and 80 percent of its small and micro-enterprises. Agriculture accounts for more than one-third of Malawi’s GDP and 90 percent of exports. Access to credit for smallholder farmers is limited. At the time of the study, the vast majority of farmers in the sample had no access to formal-sector credit, and only 7 percent had any formal loans in the previous year.

In response to this need, the Malawi Rural Finance Corporation (MRFC), a government-owned microfinance institution, provides loan products designed for rural farmers. Paprika farmers can take out loans for “starter kits” from Cheetah Paprika Limited (CP), a private agri-business that offers extension services and a subsidized package of high-quality inputs (seeds, pesticides, fungicides, and fertilizer) in exchange for farmers’ commitment to sell the paprika crop to CP at harvest time. The loan package offered did not include cash to purchase inputs. Instead, borrowers took a voucher from MRFC to a preapproved supplier, who provided the input package to the farmer and billed MRFC. The average loan value was MWK 16,913 (US$117), and expected yield from using the full input package on one acre of land was 400-600 kg, double or triple the expected 200 kg yield with no inputs. 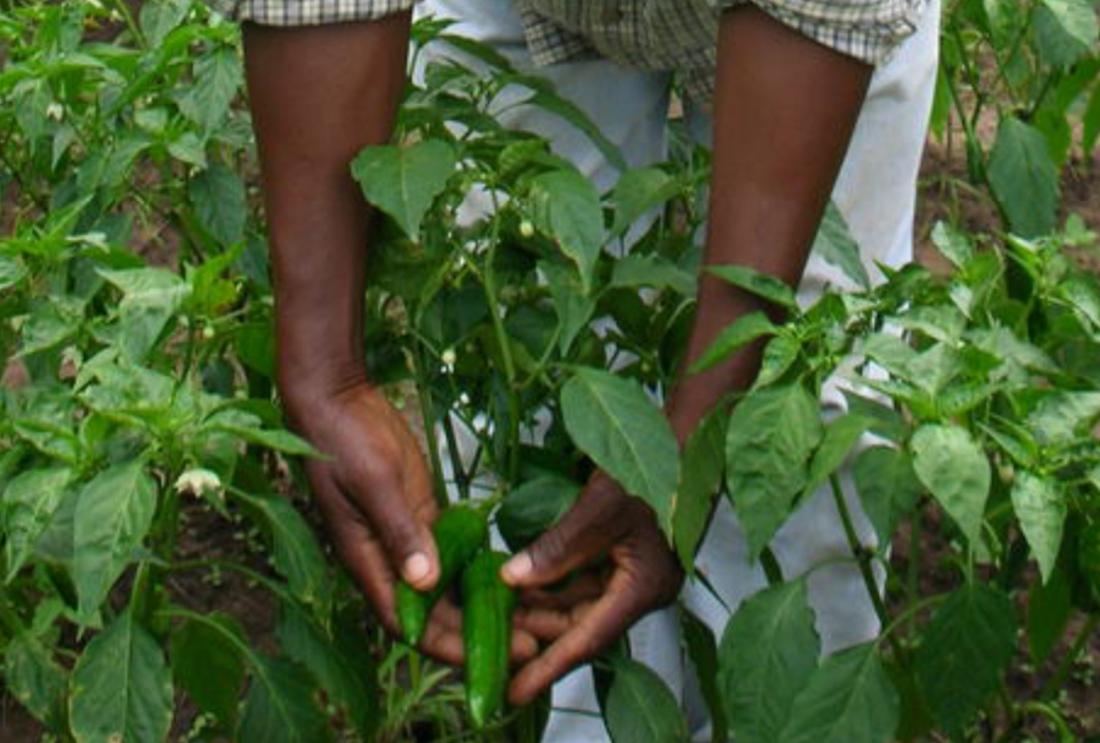 Researchers collaborated with MRFC and CP to evaluate the impact of implementing a fingerprinting system to identify borrowers who applied for loans from MRFC. More than 3,000 farmers who applied for agricultural input loans to grow paprika were randomly assigned to either a comparison group or a treatment group. Both groups were given a presentation on the importance of credit history in ensuring future access to credit.

During July and August of 2008, farmers harvested the paprika crop and sold it to CP at predefined collection points. CP then transferred the proceeds from the sale to MRFC, who deducted the loan repayment and credited the remaining proceeds to the farmers’ savings accounts. This deduction of the proceeds for loan repayment essentially allows MRFC to “seize” the paprika crop when farmers sell to CP (and for most farmers it is the only sales outlet). Researchers used data on loan sizes and repayment timing and rates to measure the impact of the fingerprinting program.

Farmers were not deterred from taking out loans.

Among the farmers who took out loans, the fingerprinted borrowers chose smaller loans.

On average, fingerprinted borrowers took out loans that were MWK 693 (approximately US$5) smaller than borrowers in the comparison group. This effect is mostly driven by the subset of borrowers with the highest default risk, based on a “predicted repayment” measure the researchers constructed from individual characteristics in the baseline survey. This result suggests that farmers predicted to be high-risk borrowers made the choice to take out smaller, less risky loans when they knew they could be identified in the future.

Fingerprinting led farmers to allocate more land and farming inputs to paprika, the crop with which loans were repaid.

One way a farmer could default on the loan would be to divert the subsidized inputs intended for paprika to other crops, while neglecting the paprika crop and allocating little land to grow it. The farmer could then sell the other crops, while leaving Cheetah Paprika with a paprika harvest too small to recover the costs of the borrowed input package.

Researchers find that fingerprinting led farmers with the highest risk of default to allocate about 8 percentage points more land to paprika, a result that is marginally statistically significant but meaningful in magnitude, as it leads to a nearly 50 percent increase in the amount of land devoted to this crop. In the long run, the effect on land allocated to repayment crops could be even greater, since in this case farmers began preparing and allocating land before the introduction of fingerprinting.

Two months after the loan was due, fingerprinted borrowers predicted to be high-risk had much lower outstanding loan balances than their peers in the comparison group. While outstanding balances should be mechanically lower due to high-risk borrowers taking out smaller loans, the effect is almost three times as large as the reduction in loan size, so the fact that farmers had smaller loans to repay cannot alone explain this increase in repayment rates.

Additionally, for borrowers in the highest-risk group, the average share of the loan amount repaid two months after the due date was 92 percent among fingerprinted borrowers, relative to 67 percent in the comparison group. In other words, for these farmers, fingerprinting closes roughly three-quarters of the gap between repayment rates in the comparison group and full repayment. Fingerprinting also nearly doubled the proportion of highest-risk borrowers who fully repaid their loan on time, and who fully repaid their loan eventually. By contrast, farmers in the low-risk groups did not change their repayment rates in response to fingerprinting.

Using biometric technology to identify borrowers had a high rate of return for the lender.

The researchers conservatively estimate a net benefit to the lender of MWK 281 (US$1.94) per individual fingerprinted, and a benefitcost ratio of 2.34, based on benefits to the lender in terms of increases in repayment, and costs including equipment, loan officer time, and transaction costs per fingerprint checked. There may also be other benefits to the lender that this ratio does not capture. For instance, the impact of fingerprinting may become larger over time as the lender’s dynamic incentives become more credible.

Borrowers, especially high-risk borrowers, responded strongly to knowing that they could be easily identified by lenders in the future. Risky borrowers voluntarily chose smaller loans in order to improve their likelihood of repayment (reducing adverse selection) and devoted more land and agricultural inputs to the crop with which the loan was repaid (reducing moral hazard). In economic terms, this reduced information asymmetries and improved the efficiency of the credit market through improved repayment rates.

Improved identification may address one barrier to providing credit in rural areas.

If difficulty in identifying borrowers deters lenders from offering credit, the fingerprinting techniques explored in this evaluation could potentially reduce one of the risks of providing credit in rural areas. Further research could explore whether improved identification systems would make lenders more likely to increase the supply of credit or offer more favorable borrowing contracts to well-performing borrowers.

Although Malawi does not have a national credit bureau, study participants were told that their fingerprints and credit histories could be shared with other lenders. The results indicate that borrowers, and particularly the riskiest borrowers, do change their repayment behavior when they believe that improved identification will allow lenders to condition credit decisions on past credit performance. While this study operated in a very specific context, its results can provide clues for how borrowers may respond to identification systems that allow lenders to share credit histories through a credit bureau.

2 result(s)
Financial inclusion for the poor: Using RCTs for effective program design
Fingerprints for Financing: Removing Some Risk From Lending in Africa