In many societies facing violent conflict, policymakers have attempted a number of strategies to reduce conflict and generate support for peace initiatives, including community education and reconciliation programs. One other possible avenue for building support for peace initiatives could be to facilitate voters’ engagement with financial markets. By leading people to reevaluate the costs of conflict, increased engagement with the economy could theoretically change political attitudes and mitigate conflict.

Increasing voters’ engagement with financial markets has the potential to influence their choices through both financial (‘pocketbook’) considerations and through social considerations. In the first case, if the peace process leads to economic improvements, voters may support the peace process even if their political views remain unaffected. In the second case, increased exposure to financial markets may change voters’ underlying political views. Can participation in financial markets in conflict-ridden areas lead individuals to re-evaluate the costs of conflict, change their political attitudes, and change their votes?

The Israeli-Palestinian conflict is a geopolitically important and highly persistent conflict with opposing interests and ethnic animosities that have been reinforced by more than eighty years of recurrent violence. Political debate in the region has largely revolved around the conflict, with a smaller focus on economic policies. Parties on the Israeli right (led by the Likud party) largely favor the status quo, viewing concessions for peace as highly risky and likely to lead to a major deterioration of the security situation. In contrast, the left (led in 2015 by the Zionist Union party) tends to favor peace concessions, as they view status quo policies (including permitting settlements in the West Bank) as costly. Parties in the center focus on different issues and are largely seen as potential coalition partners for either side. In 2015, Jewish voters comprised 80 percent of the Israeli voting population.

This evaluation was set in the context of the March 2015 general elections, which followed Israel’s parliamentary democracy system with proportional representation. Participants in this study were chosen from a long-running online panel survey of 60,000 Jewish Israeli citizens who had voted in the previous election in 2013. This survey is nationally-representative in terms of age and sex, and is commonly used for commercial market research, political polling and academic studies. From this survey, researchers drew a sample of 1,345 individuals; the sample over-represented non-orthodox voters who were considered “swing voters” in the previous election. 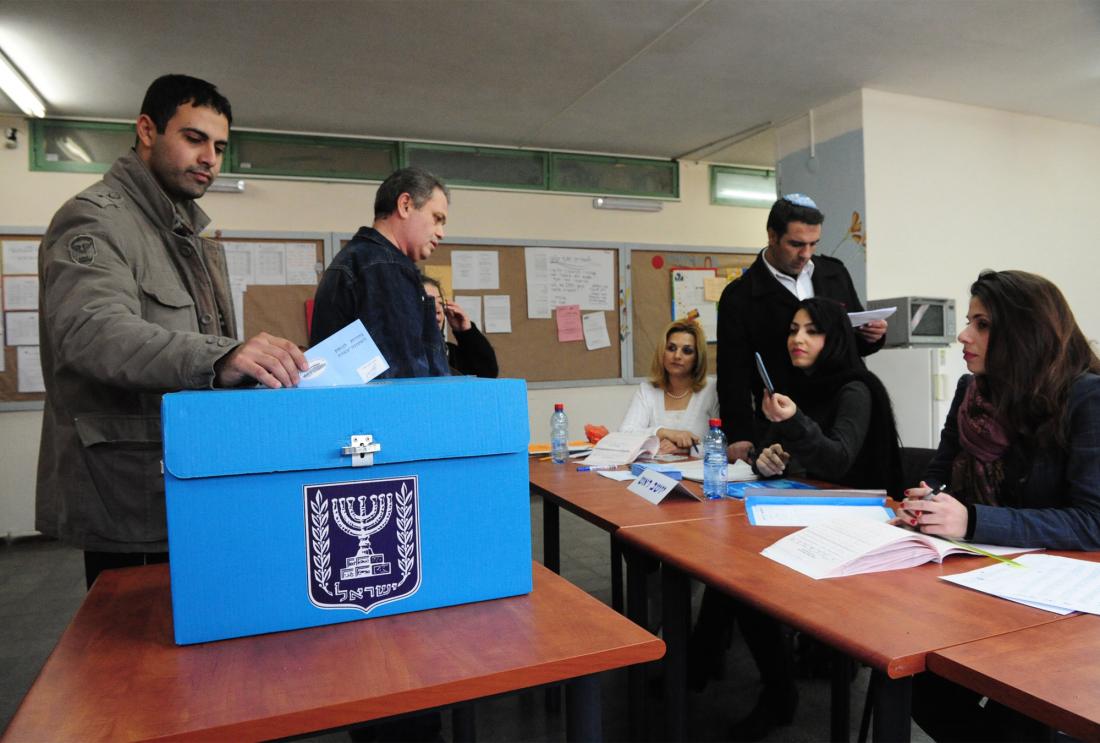 Voters at a polling station in Ashkelon. Photo: ChameleonsEye | Shutterstock.com

Researchers conducted a randomized evaluation to test the impact of engaging with financial markets on individuals’ political attitudes and voting preferences. From the sample of 1,345 individuals, 1,036 were randomly assigned to receive financial assets worth either $50 or $100, while the remaining served as the comparison group. To encourage engagement with the market, participants received weekly updates on their portfolio and were asked to enter a decision (buy, sell, or take no action) on up to ten percent of their holdings every week. Failure to do so resulted in a loss of ten percent of the holdings that could have been traded that week.

Researchers randomly assigned participants to additional subgroups to further understand the mechanisms of change in political attitudes and voting preferences:

Trading domestic vs Palestinian assets: Participants who received stock endowments were randomly assigned either domestic or Palestinian stocks. This was designed to provide insight on whether exposure to assets of the opposing group in the conflict—Palestinian stocks in this case—would have particularly strong effects on attitudes towards the peace process.

To measure participants’ interactions with financial markets and their political attitudes, researchers partnered with a survey company to conduct a series of financial surveys and social surveys.

Overall, results suggest that exposure to financial markets influenced the political attitudes and voting preferences of individuals in the group. Voters who were offered a financial asset were 6 percentage points more likely to vote for parties favoring peace processes, relative to a vote share of 25 percent in the comparison group. Both very religious and more secular voters in the program group were more likely to agree with the principles underlying a potential peace deal (although very religious voters did not change their voting preferences). These effects lasted for at least one year after the intervention ended. Additionally, being assigned to Palestinian assets did not lead to a significant difference in political attitudes and vote choice when compared to those assigned Israeli assets.

‘Pocketbook’ vs. social incentives: Changes in voting preferences appear to be a result of changes in underlying policy preferences on social, rather than pocketbook, considerations. Individuals who were required to divest their stocks before the elections (and hence had no financial stake in the outcome that was a result of the evaluation) were, if anything, more likely than those who continued trading through the date of the election to vote for the left. Findings from survey data also suggest that changes in policy preferences reflected changes in individuals’ attitudes towards the peace process, and not economic policies: individuals exposed to financial markets were 11 percentage points more likely to agree with the underlying principles of the peace process, relative to 7 percent in the comparison group, while their attitudes towards economic policies did not change.

Factors driving changes in policy preferences: The intervention appears to have increased the salience of economic considerations, the consumption of financial news, and financial literacy among individuals exposed to financial markets. There is evidence that these individuals also became more aware of the risks of status quo policies: increased support for peace concessions was larger among risk-averse participants than among those who tolerated risk.

These results suggest that exposure to financial markets has the potential to shift attitudes in areas of persistent ethnic conflict.