Pooling resources may help low-income rural households overcome barriers to making beneficial consumption and investment decisions. Researchers studied a government-funded conditional cash transfer program to evaluate the impact of family networks on consumption and investment decisions for low-income households in Mexico. Food expenditure increased among both eligible connected households and ineligible households connected to families who were offered the program. Connected households increased their education investments and reduced child labor, implying that being connected to other nearby family members helped them to pool resources.

Progresa (most recently called Prospera) was a publicly funded anti-poverty program in Mexico that provided cash transfers to low-income households conditional on their children’s primary and secondary school attendance and mother’s attendance at health facilities. At the time of the study, secondary school enrollment rates among the sample population were around 65 percent. In an effort to encourage families to continue investing in their child’s education, Progresa offered larger cash transfers for students in higher school grades. The value of these larger cash transfers (up to MXN 610—US$61 in March 1998—per month for ninth grade girls in 1999) corresponded to between one-half and two-thirds of the full-time child wage in villages surveyed in a 2004 study.1

Access to credit is limited in rural Mexico. In the area where this evaluation took place in 1998, less than 1 percent of surveyed households reported having access to formal credit. 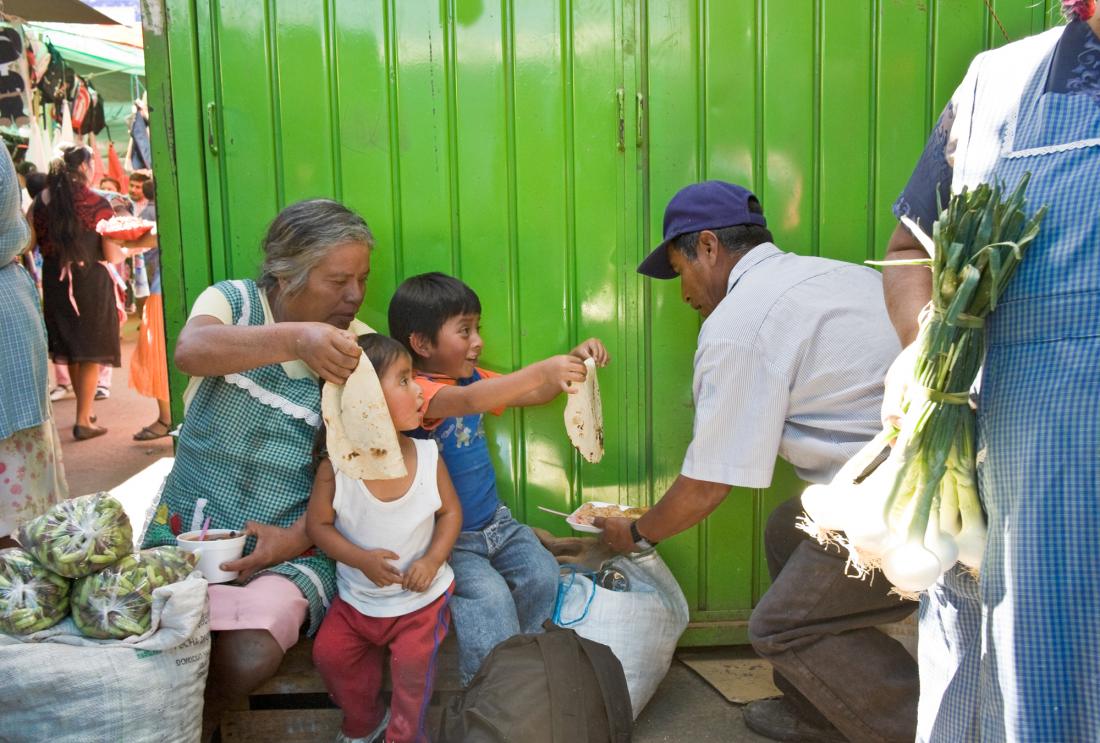 Researchers utilized a randomized evaluation of the Progresa program to examine how extended families in rural Mexico living in the same village shared resources. In 1998, the Mexican government randomly assigned the Progresa program to 320 villages, while 183 villages served as a comparison group and did not receive the program until a later time. Within treatment villages, all eligible households who fell under a certain poverty index were offered the Progresa cash transfers.

To understand how the size of an extended family affected the way households used the Progresa cash transfers on food consumption and investment choices, such as children’s education and livestock, researchers conducted household surveys for over 20,000 households. They compared outcomes among households who were or were not connected to nearby family, who were or were not eligible for the program, and who were in comparison villages that did not receive the program. Surveys occurred every six months starting one year before the intervention and ending a year and a half after the intervention. Researchers measured these outcomes again five years after the program.

Investments: Eligible isolated households used a substantial portion of the cash transfer to purchase large livestock (cattle) in the short term, increasing the value of the cattle they owned by MXN 887 (US$88.70 in March 1998) relative to comparable isolated households in comparison villages. These households may have chosen to use their transfers to purchase livestock rather than food, because it would be difficult to otherwise finance such large investments without access to credit, and livestock could generate an additional source of income. However, these changes in livestock ownership faded within five years of the end of the program, perhaps because households chose to sell the livestock when hard economic situations arose.

Eligible connected households showed no increase in livestock investments, and instead increased their children’s enrollment in secondary education by 7.5 percentage points on average relative to comparable households in the comparison group, a 12 percent increase. These households also reduced their incidence of child labor by 3.6 percentage points relative to the comparison group. Eligible isolated households reported no differences in schooling investments or children working, and this gap in schooling investments between connected and isolated households increased over the five-year period.

Researchers hypothesize that only connected households invested in their children’s secondary education because the transfers alone were not large enough to compensate for the income lost from sending children to school instead of work. Only connected households could afford to make that investment by pooling resources with their extended families. These results suggest that when connected families have more resources, they prefer to invest in children’s schooling rather than having them work. Furthermore, there were no impacts on child labor among ineligible connected households, suggesting that family networks allocated resources to the poorest family units (those eligible for Progresa) for education investments.

The consumption and education investment gains within family networks persisted in the long term. Researchers suggest that initial increases in education investment may have enabled the increased consumption experienced later. Connected households that received cash did not return to pre-program poverty levels after five years, suggesting that the combined effect of the cash transfer and families pooling their resources might have enabled them to escape poverty traps.