Most interventions to connect poor households to the drinking water network are primarily concerned with physical health, but improved water access may have other important effects on household well-being by reducing the amount of time spent fetching water. Researchers conducted a randomized evaluation to look at the effect of private connections in a setting where most households already had access to high-quality water through public taps. They found that households in Tangiers, Morocco had a high willingness to pay for piped water, and while home water connection had no impact on waterborne illness, households' self-reported happiness improved substantially.

Access to water is a critical factor in household welfare, in large part because of the well-established health benefits of a reliable, clean water supply. But it is difficult, in most settings, to separate the effects of clean water from the effects of increased quantity and convenience. A limited water supply affects the lives of the poor in many ways beyond health. Fetching water is time-and-labor-intensive, which could detract from education or productive activities, a burden which is thought to fall disproportionately on women and children. When a family’s water supply is limited or contested, it can be a source of tension within and among households. And inconvenient access to water may contribute to stress or unhappiness.

In urban Morocco, the setting of this study, households that rely on public taps spent more than seven hours a week collecting water, despite a relatively high density of water taps. In this sample, 65 percent of households without a water connection reported that water was a major source of concern: 16 percent had a water-related conflict within the family, and 12 percent had a conflict with their neighbors. Thus, both within the family and between families, water was an important source of stress and tension. 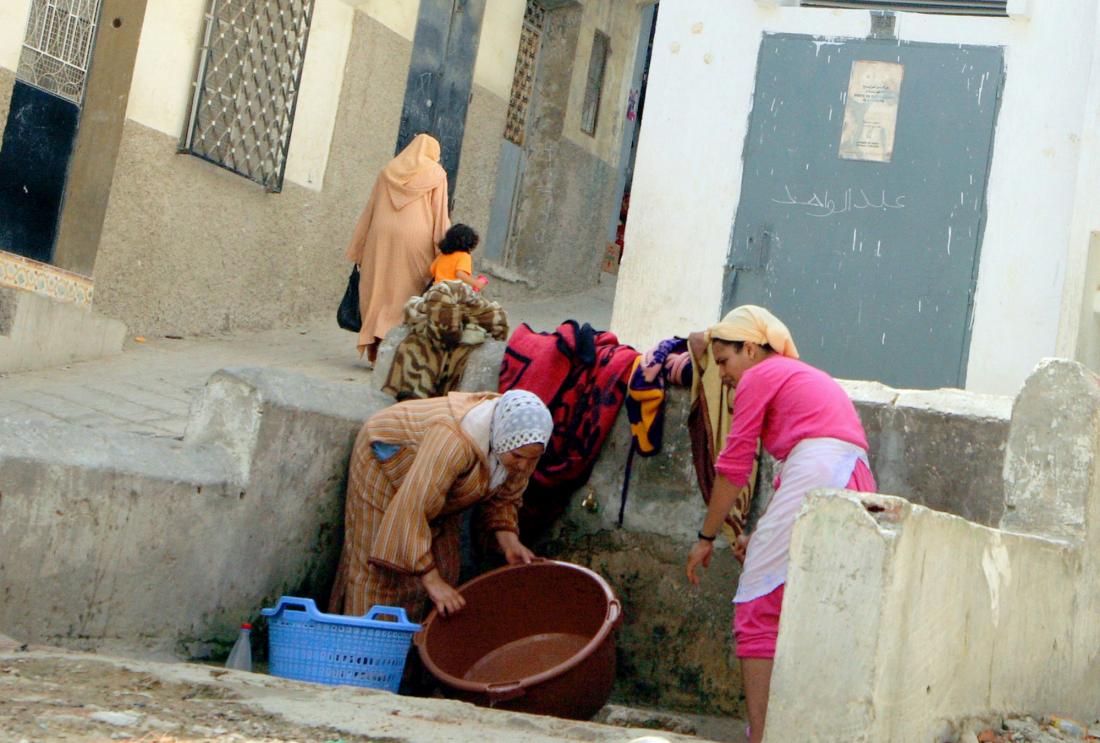 Households valued their in-home water connection. The differential pricing between the zones had little effect on how many households bought a connection. Three years into the program, no households had been disconnected from the grid for defaulting on their loan or on water payments, and 44 percent of households had paid all installments to date.

Getting connected had no effect on the quality of drinking water or household health. E. coli levels were the same in both treatment and comparison houses. Likely because of this, the program did not have any effect on incidences of water-borne illness in children or adults. These results suggest that water quantity alone plays a very small role in health in the context studied.

Household water connections saved families a significant amount of time; this extra time was spent primarily on leisure activities. The time that families in the treatment group spent fetching water decreased from half an hour per day to essentially zero. The time saved did not increase the time family members spent generating income, through working or starting a business, or the time that children spent studying. As a result, the program had no impact on household income or school completion. Overall, households used the time saved primarily for leisure activities, such as watching TV and socializing.

Getting connected to the water system reduced conflict and increased overall quality of life. In the comparison group, 16 percent of households were having conflict with family members over water-related issues, while 12 percent were in disagreement with neighbors. These tensions were almost completely eliminated in the treatment group. Connections also improved treatment households’ perceived quality of life, with the number of households reporting that life had improved in the last year almost doubling (from 23 percent to 44 percent).

Families highly valued convenience and ease of access to water. Households in Tangier were willing to pay a lot for increased water quantity and convenience. Though people did not use the extra time generated for productive activities, the extra time and the decrease in stress levels related to water collection increased households’ self-reported happiness. This may imply that, in cases where large investments are undertaken to connect villages to clean drinking water, households may be willing to pay for part of the “last mile” of individual connection, and this may greatly increase the social return of the fixed investment.

Facilitating access to credit could enable households to invest in costly quality-of-life improvements. Households would not be able to pay for the fee upfront but continued to pay in installments.

Information on what benefits are available, and help navigating administrative procedures, are important in ensuring access to services. Given the large increase in household well-being after tap installation, it is striking that the simple “nudge” of providing information and facilitating administrative procedures had such a large effect on the take-up of the credit offer from Amendis. This could be due either to a lack of information about the credit program or to the fact that households were not able to surmount the administrative barriers imposed by the program. This suggests that not only making credit available but also simplifying or assisting with the application process could greatly increase families’ willingness to invest in water connections.

Social networks are an important channel for learning about new programs and benefits. Comparison households were more likely to buy a connection when they saw their neighbors benefiting from having a connection. Similarly, households given a free, long-lasting insecticidal bednet in Kenya were more likely to buy one later, as were their neighbors, presumably because they learned about the benefits of the product.