Summer youth employment programs (SYEPs) across different cities have reduced certain criminalized behaviors among participants. Researchers studied whether Boston’s SYEP had an effect on the criminal justice outcomes of participants and sought to gauge the potential mechanisms driving these effects. The program reduced participants’ violent and property crime-related arraignments. These reductions were correlated with significant increases in conflict resolution skills following SYEP participation, suggesting that the program’s impact on criminal justice involvement may be due to strengthening these skills, rather than simply occupying youths’ time that might otherwise be spent engaging in illegal activities.

Numerous cities have voiced concerns about recent increases in violent crime despite the overall decline in crime over past decades. Youth are disproportionately impacted by these increases, as violence is more likely to both harm and be perpetrated by youth than adults. Further, the arrest rate for violent crimes is 500 percent higher for African-American youth than white youth. Gaps in economic opportunity arising from low-income youth of color being concentrated in neighborhoods with few job opportunities and underserved schools is a major driver for these racial disparities and overall trends in youth violence.

To address this dearth of economic opportunities, cities across the United States have utilized summer youth employment programs (SYEPs), which provide employment and skills training to youth in predominantly low-income communities. Numerous studies have found SYEPs in cities, including Chicago and New York City, to reduce some criminal justice involvement of participants, yet less is known about why SYEPs had these effects. In order to maximize SYEP’s benefits for youth and communities and optimize resource allocation, it is essential to understand which aspects of these programs are responsible for reducing criminal activity among participants. Possibilities include:

The Boston Mayor’s Office of Workplace Development operates a city-wide SYEP designed to connect approximately 10,000 youth with employment for six weeks in the summer months. Youth in the program are paid the state minimum wage to work for up to 25 hours per week at one of about 900 local employers and receive an additional twenty hours per week of job-readiness training. The job-readiness curriculum is designed to support youth with both practical job skills (e.g., resume and cover letters) and “soft” skills such as conflict resolution and communication. Employers are a combination of private companies, non-profits, and city agencies.

All Boston residents between the ages of 14 and 24 are eligible to apply to SYEP. Youth apply through local intermediaries under contract with the Mayor’s Office, like Action for Boston Community Development (ABCD) with whom the researchers partnered for this project. Due to the high number of applicants, ABCD uses a lottery system to select youth for participation in the program. In 2015, over 4,000 youth applied to SYEP through ABCD. Applicants were predominantly youth of color (over ninety percent), with just over fifty percent identifying as African American. Approximately eighty percent of applicants were between the ages of 14-17, and about 88 percent were students. There were also slightly more women and girls, with just over half listed as female. 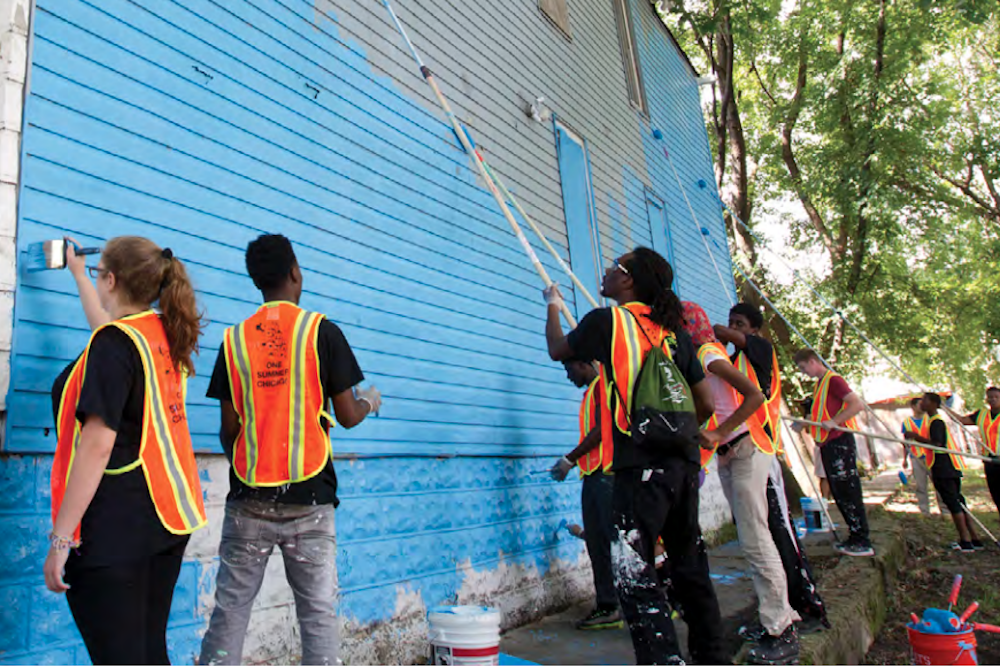 The researchers evaluated whether Boston’s SYEP program impacted participants’ criminal justice outcomes and the mechanisms through which it might do so. To answer these questions, the researchers utilized the random selection embedded in ABCD’s program design. Of the 4,245 applicants in 2015, 1,186 youth (28 percent) were randomly selected via lottery for placement at a job, creating the treatment group, and the remaining 3,049 unselected applicants (72 percent) made up the control group.

To quantify the effects of SYEP on criminal justice outcomes, the researchers used administrative data to track arraignments in the 17 months following the start of the program. To begin to gauge how SYEP might affect criminal justice outcomes, the researcher also conducted surveys on the treatment and control groups prior to the start of the program and at the end of the summer. This survey assessed behavioral and attitudinal correlates of youth violence, job readiness, and educational aspirations.

Main takeaways: Participation in Boston’s SYEP reduced the number of arraignments for both violent and property crimes, but did not reduce the likelihood of ever being arraigned. The program increased participants’ behavioral, employment, and educational skills and attitudes on a number of measures, with some social skill improvements correlating to arraignment reduction.

Criminal Justice Outcomes: During the 17-month follow-up period, youth who participated in SYEP were arraigned .031 fewer times (a 35 percent reduction) for violent crimes and .022 fewer times (a 29 percent reduction) for property-related crimes. The impact of the Boston SYEP on violent crime was even greater for males, who were arraigned .071 fewer times than those in the control group. SYEP had no measurable impact on the percentage of youth who were arraigned, the absolute number of arraignments, or arraignments for other crimes. The reduction in arraignments for violent and property crime is estimated at a combined total savings of $1,928 per youth, outweighing the administrative cost of $600 per participant (excluding wages).

Suggested Mechanisms: According to self-reported survey data, youth who participated in SYEP improved on a variety of behavioral, social, job-related, and academic skills and attitudes. Exploratory analyses suggest that increases in select social skills, including managing emotions, asking for help, and conflict resolution, may be linked to the reduction in arraignments for violent and property crimes. These findings are consistent with evidence from Chicago in that both studies suggest that improvements in social skills, rather than improvements in job prospects or simply occupying youths’ time during the summer, could be a primary mechanism through which SYEPs reduce criminal justice outcomes.

Remaining questions: While this research sheds some light on why SYEPs reduce arraignments, findings are largely suggestive rather than definitive. Therefore, more causal research is needed to pinpoint which aspects of the program design have the greatest impact on criminal legal involvement.