Previous research on what affects vote choice has focused on candidates’ qualifications, policy positions, and performance in office. However, voters might also care about candidates’ connections with influential, higher-level politicians—particularly in settings where other information is hard to come by. Researchers evaluated the impact of randomly varied information about candidates’ political connections on voter’s beliefs and self-expressed support in the context of a 2015 local election in Sargodha, a district in rural Pakistan. Providing information on candidates’ connectedness increased voter’s expressed support for more well-connected politicians. In contrast, information on past public spending increased voter satisfaction with the government’s performance, but did not affect expressed support for incumbent candidates.

Voters in low- and middle-income contexts may lack information about the qualifications and policy positions of political candidates, which can result in the election of low-quality candidates and politicians who do not address citizens’ needs. Past literature has shown that providing information on candidates’ qualifications, policy positions, and performance in office can affect voter turnout and for whom people vote1.

In some contexts, where such information is hard to come by, voters might also care about candidates’ levels of political connectedness—a factor that has been understudied in rigorous evaluations. This is particularly the case in contexts where political and personal networks often determine a politician’s ability to provide services for their constituents. In such cases, voters might not be able to obtain information about a politician’s past performance, but they may be able to predict their future performance if they know politicians’ levels of connectedness.

This study took place in the context of the 2015 local government elections in the rural Sargodha district in Punjab, Pakistan, the most populous province in the country. With a history of periodic military governments and subsequent civilian governments, this election brought in the first local government in the province after a gap of 10 years and saw a considerable turnout of 61 percent.  Approximately 50% of voters in focus groups in this study were undecided about whom to vote for weeks before the election.

Local government in Punjab is organized around a two-tier system: a lower tier (called the union council) and the higher tier (called the district council). While each of these tiers is responsible for performing different local functions, a wide range of citizen services (such as road maintenance, sewage, irrigation, electricity, education, health, and social welfare programs) remain centralized at the provincial and federal levels.

In this setting, local candidates who have strong connections with higher-level politicians inspire greater confidence among voters—a factor that may influence their choices in local elections. In Sargodha, participants in focus groups for this study demonstrated high knowledge of a local candidate’s connections, and nearly three-fourths of focus groups declared political connections as an extremely important reason to support a local candidate. In addition, a majority of focus group members expressed a deep concern for services that went beyond the jurisdiction of local union councils and nearly 50 percent revealed that they would be willing to support an opposition or independent candidate in the election if they were well-connected and willing to use their connections to deliver services locally.

Candidates contesting the 2015 local elections made an explicit attempt to display their connectedness with the Punjab Muslim League Nawaz (PML-N), the incumbent party at the federal and provincial levels. Campaign materials and posters featured pictures of the Prime Minister and other high-level party members and in some cases, even highlighted their connections with higher-level politicians across parties. 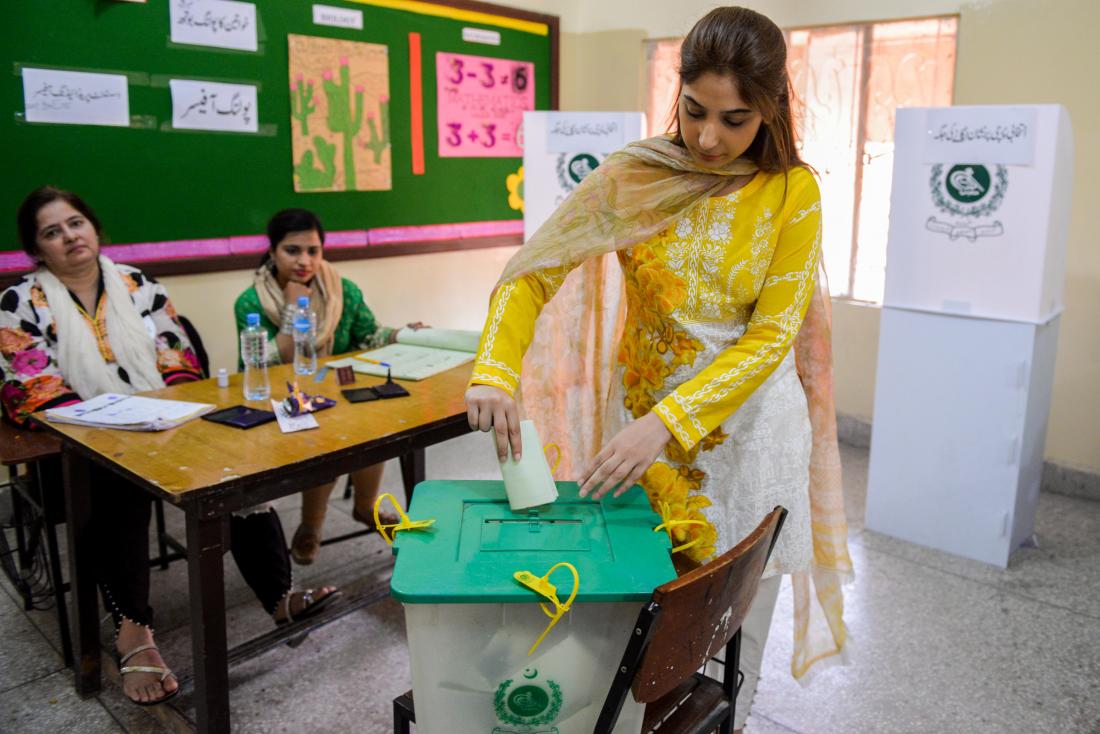 Researchers conducted a randomized evaluation to test the impact of providing randomly varied information about candidates’ political connections on voters’ expressed support for candidates in the 2015 local government election in Sargodha, Pakistan.

Researchers collected original data on candidates’ connectedness by conducting interviews with key informants or people who were likely to have detailed firsthand information about the political affairs in the region (typically senior government officials and retired politicians). Researchers also calculated government spending at the union council level by aggregating the incumbent party’s expenditure on water filtration plans, water pipes, sanitation, drainage, and construction, compiled by the Water-Sanitation, Building, and Health Departments of the district of Sargodha.

Voters’ expressed support: At the beginning of the interview, surveyors asked voters to indicate how much they supported a candidate using a 0 (strongly oppose) to 100 (strongly support) scale. Voters who received information about a local candidate’s connections to higher level politicians were 2 percentage points more likely than voters in the comparison group to increase their own support of a candidate along the 0-100 scale at the end of the interview. This change was driven in large part by information provided on more well-connected candidates; voters who received information about these candidates were 3 percentage points more likely to increase their expressed support. These effects are modest, which may be due to voters’ already-high levels of support for well-connected candidates at the start of the interview.

In contrast, receiving information on public spending did not have an effect on voters’ expressed support for an incumbent candidate.

These results suggest that in the absence of concrete information on candidates’ qualifications and past performance, citizens look to other cues for estimating future local government performance–such as candidates’ connections to higher levels of power. This might have adverse consequences for democratic accountability, as in these contexts, candidates might not be motivated to meet voters’ needs if their performance is not considered by voters in future elections.