The Impact of Financial Incentives on School Participation in Mexico

Conditional cash transfer (CCT) programs have become a popular means of encouraging school enrollment, but some worry that when children attend school and the supply of child labor in a village decreases, child wages could rise. In Mexico, researchers evaluated the impact of PROGRESA, a national CCT program, on both school enrollment and child wages. Cash transfers successfully incentivized parents to enroll their children in school, despite the fact that local wages for child labor increased when the program was implemented.

Although most governments have eliminated fees for primary and secondary education, families may face other costs of sending their children to school. Many schools require pupils to wear uniforms or have basic supplies, and the cost of these materials can deter families from enrolling their children. Children who are attending school also have less time to work and earn a wage to help support their family. Conditional cash transfer (CCT) programs have become an increasingly popular means of encouraging school attendance, by providing families cash conditional upon their children attending school a minimum amount of time. However, questions about the secondary effects of CCT programs remain. When children attend school and the supply of child labor in the village decreases, will child wages subsequently increase, and will parents become less likely to keep their kids enrolled in school?

In 1997, the Mexican government implemented a national CCT program, called PROGRESA, with the objective of improving children's nutrition, health, and education. The cash transfer benefit from PROGRESA comes in two forms. The first is a monthly fixed stipend of 90 pesos (approximately US$7) conditional on family members obtaining preventive medical care. The second type of transfer comes in the form of educational grants, which are given to families of children starting the third grade, conditional on children attending school a minimum of 85 percent of the time and not repeating a grade more than twice. The size of the education stipend is larger at higher grades and is also higher for girls, because the government wanted to encourage older girls, in particular, to stay in school. The rates vary from 60 pesos per month for children enrolled in third grade to 225 pesos per month for females enrolled in the third year of junior high school. 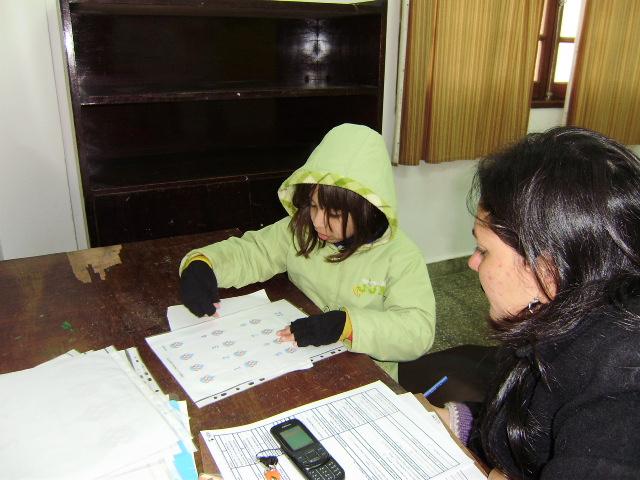 Census data from 1997 was used to identify communities eligible for PROGRESA on the basis of socioeconomic status. For budgetary and administrative reasons, all eligible communities could not be brought into the program at the same time. Instead, communities had to be phased into the program over a two-year period. In 1998, of the 50,000 communities deemed eligible, 506 were chosen to participate in the evaluation - 320 were assigned to the treatment group and would receive program benefits immediately, and 185 were assigned to the comparison group and would begin the program almost two years later. Households in the treatment group received the cash transfer every month, conditional on completing the required health and education components. Once enrolled, households received benefits for a minimum of three years, after which they were re-assessed for eligibility.

In addition to the baseline survey, follow-up surveys were conducted for all households living in the 506 evaluation communities every 6 months between November 1998 and April 2000. The household survey covered each child' s age, gender, education, current job status, earnings, school participation, and health status. The household survey was also supplemented by a locality questionnaire, which provided information on the prices of various commodities and average local agricultural wage.

The results suggest that PROGRESA had a positive effect on the enrollment of children, especially after primary school. Although the program had no significant impact on enrollment of 10 year-old boys, it increased enrollment for 14 year-old boys by 14 percentage points. Program impact then declined for older boys. There was no impact on enrollment of 10 year olds, because almost all children below grade 6 already attended school. The program impact increased with age as the probability of dropping out increased, until around age 14, at which point the cash transfer was no longer available.

If PROGRESA was effective in increasing school participation, then this could result in a reduction of the supply of child labor available in villages, which could result in an increase in child wages. The results suggest that the program did indeed increase child wages by around 6 percent. If families valued the cash transfer and labor income equally, then such an increase in child wages could actually cause parents to pull their children out of school. However, the results suggest that families place more than double the value on the cash transfer than on potential labor income. In other words, the cash transfer has a stronger impact on enrollment than would an equivalent reduction in child wages.

In an attempt to further understand the impact of the cash transfer on enrollment, researchers simulated different variations of PROGRESA using a dynamic model. A simulated program, which increased the amount of the transfer for children above grade 6, while eliminating the transfer for primary school children, could almost double the impact on enrollment for older boys, at no additional cost. At the same time, this kind of program would not affect school enrollment of younger primary-age children, since almost all of them would attend school up to grade 6 even without the treatment. The Mexican government is now piloting this variation of the traditional PROGRESA program.