In order to minimize their risk of contracting HIV, it is crucial for girls and women to adopt safe sexual behaviors. Increasing awareness about the consequences of risky behavior could influence the choices girls and women make, but there has been mixed evidence on how best to present risk information and engage youths in critically assessing the risks they face. For instance, systematic reviews of the effects of school-based HIV education programs in sub-Saharan Africa reveal varied results and points to the difficulty in translating knowledge into concrete behavioral changes. Research also indicates that awareness interventions led by teachers could face limitations due to teachers’ status in relation to pupils, discomfort in discussing sensitive topics, and lack of adequate teaching methods to effectively deliver HIV risk education. A possible alternative is to use external professionals or education technology: a previous study in Kenya found that young girls were responsive to risk information delivered by outside facilitators through a video-based approach. How can the type of risk information provided and the delivery of this information affect adolescents’ knowledge, perceived risks, and sexual behavior?

In 2009, at the time of the study, Cameroon was the country with the highest rate of HIV prevalence in the Central and West Africa region, at 5.3 percent of the population aged 15-49. 2 Moreover, HIV prevalence was more than five times higher among girls and women aged 15-24 than among men in that age group. This may be partially attributed to girls becoming sexually active at a younger age as well as the physiological differences that make male-to-female transmission more likely than female-to-male transmission.

In response to this, the government of Cameroon authorized school-based HIV prevention programs in 2004 and incorporated teacher trainings as part of a strategy to improve sexual education. However, at the time of this study in 2009, the HIV/AIDS program had not been integrated into the standard curriculum for either primary or secondary schools and only 2.6 percent of schools had trained teachers. A 2010 survey administered to school staff in the study area conducted by partner organization Institute for Research, Socio-economic Development and Communication (IRESCO), suggested that while teachers had a relatively good knowledge of HIV, they did not know how to teach the material and felt that they needed special training.

The study took place in three French-speaking regions of Cameroon, Yaoundé (urban), South, and West (mostly rural). Awareness of HIV among girls in the study was almost universal; however, knowledge on transmission and risk factors was quite poor. Less than a third of girls were aware that men above 25 have a higher chance of having HIV than men below 25, and virtually none of them reported considering partner choice as a strategy to avoid infection. HIV education was more prominent in Yaoundé compared to the South and West regions, with 23 percent of girls having been exposed to HIV education led by external consultants in Yaoundé, compared with 16 percent in the more rural South and West regions. Meanwhile, teen pregnancy was much more frequent in these rural areas (12 percent versus 4 percent in Yaoundé), and the same was true for school dropouts (9 percent versus 3 percent in Yaoundé), and sexual activity (34 percent versus 17 percent in Yaoundé). 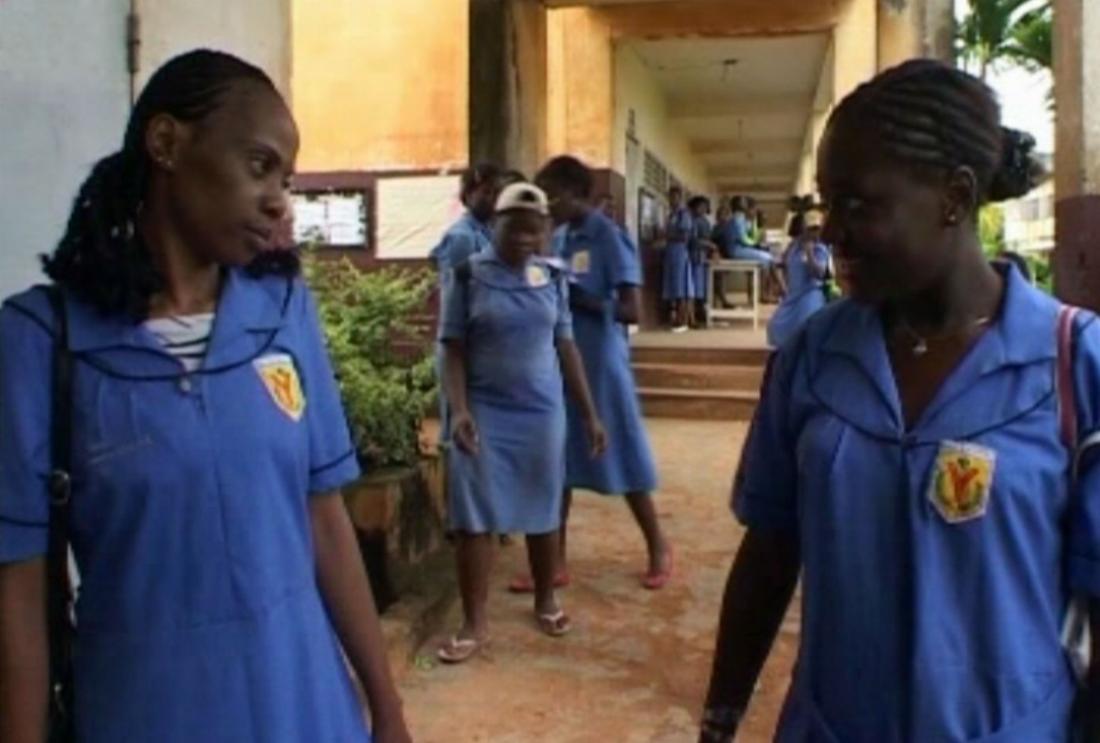 Researchers partnered with IRESCO to evaluate school-based HIV prevention interventions for girls in the eighth grade. They tested a series of interventions to understand the importance of both (1) the content of the message and (2) the identity of the messenger. The content was either a basic message, which focused on abstinence, faithfulness, and condom use; or a basic + relative risk message, which used this same curriculum but added information on infection rates by sex and age (particularly highlighting the risks associated with “sugar daddy” or “sponsor” relationships and their responsibility for cross-generational transmission of HIV). The content was delivered face-to-face by either permanent school staff or a one-time visit by external consultants. They also benchmark these interventions against as “salience” intervention: asking youths to participate in a one-time, self-administered in-class quiz.

In each of 318 public schools, one eighth grade class was randomly assigned to one of four groups:

In addition, half of the schools in each of the four groups was randomly assigned to the In-Class Quiz intervention: a facilitator from IRESCO visited the class at the beginning of the year (before any other intervention) and had students complete an hour-long anonymous in-class quiz that asked about HIV knowledge, the sexual behavior of one’s peers, beliefs about the risks of pregnancy and HIV infections from unprotected sex, and one’s own sexual behavior.

On average, the HIV prevention programs reduced the incidence of teen pregnancy in the following nine to twelve months by 2.9 percentage points (a 30 percent decrease) from a base of 9.5 percent in the comparison group. While the results did not differ substantially across the individuals exposed to the various programs (including for those only offered the In-Class Quiz), heterogeneity analysis by geography shows that the programs had no detectable effects among urban schoolgirls.

Knowledge and HIV prevention plans: Both the teacher and consultant interventions increased awareness of HIV infection rates by gender, and the relative risk message was additionally successful in increasing the understanding of the relationship between HIV-risk and partner’s age. The interventions increased the prevalence of the belief that condoms are very effective; however, they did not increase the salience of condoms as a way to avoid HIV, which may be related to the fact that condoms were already the most common method used prior to the intervention. The interventions also increased the likelihood that girls reported one rather than multiple strategies they planned to use to prevent HIV, suggesting that they helped girls focus on a concrete HIV prevention plan. Girls who received HIV programs were 6-10 percentage points more likely to report abstinence as their sole strategy from a base of 15.2 percent in the comparison group.

Sexual behavior and pregnancy: The interventions reduced the incidence of unprotected sex and hence the likelihood of having started childbearing within one year of the intervention by 2.4 to 4.6 percentage points, from an average of 9.5 percent in the comparison group (a 25 to 48 percent decrease).  The relative risk message did not have a higher impact on actual pregnancies than the other interventions, suggesting that, in the Cameroon context, the sugar daddy risk message did not seem to be particularly important above and beyond the basic message.  The In-Class Quiz alone had an effect comparable to those of the face-to-face education programs, implying that being surveyed alone can cause behavioral change. Additionally, there was no further reduction from combining the quiz with the education programs, suggesting that the quiz could substitute for more intensive education programs.

Urban vs. rural impacts: All of the impacts were concentrated in rural areas. Presumably in urban Yaoundé, teenagers already had more exposure to information and experienced lower rates of unwanted pregnancy, and would thus experience smaller impacts from such interventions.

Cost-effectiveness: These interventions can be inexpensive to implement. All of the interventions cost about US$300, or US$13 per student. With an average of three pregnancies averted for every 100 students, each averted pregnancy cost around US$430.

Together, these results suggest that simple and short HIV prevention interventions can be effective at reducing risky sexual behavior and reducing the incidence of teen pregnancy in areas where behaviors are most at risk. Further, teenage response to educational interventions does not vary significantly with the format and identity of the messenger, and in fact simply asking teenagers to think through risk, options and their own behavior and strategy in a self-administered quiz can influence teenage perceptions and behaviors.