The Impact of Simplifying Pension Statements in Colombia

Saving for retirement is essential to ensure a more secure living during the elder years. The World Bank projects that 80 percent of the world's elderly will live in low-income countries by 2050, which may strain pensions systems already facing significant challenges.1 Traditional pension systems do not usually cover workers in the informal sector, and the coverage they provide is declining and often insufficient. While structural challenges can be complicated to address, targeting administrative and bureaucratic barriers that prevent people from participating in pension schemes may increase access to pensions. One such barrier is complex pension statements, which can make it difficult for beneficiaries to catch mistakes in their records that could lead to pension delays. Can simplifying program information increase understanding of key facts related to the pension system and improve coverage?

In Colombia, less than 25 percent of people of retirement age received a pension in 2019,2 and although pension coverage is expected to increase, progress has been slow.3 This low coverage rate is due, in part, to high rates of informality and low rates of contributions to pensions among informal workers. Additionally, independent workers or employers can make errors when processing contributions, or simply forget, thus not completing the minimum number of contributions to receive a pension.4

Between October 2012 and December 2017, Colpensiones, Colombia’s public pension fund administrator, processed more than three million requests to correct information in account statements.5 Having an incomplete labor history is especially problematic for low-income workers who often have had multiple employers and may make less regular contributions. Early detection of potential errors and information gaps is crucial to ensure that people receive their pension. The beneficiary is usually the best person to identify and report these errors, however, pension account statements are complex and can be difficult to understand. 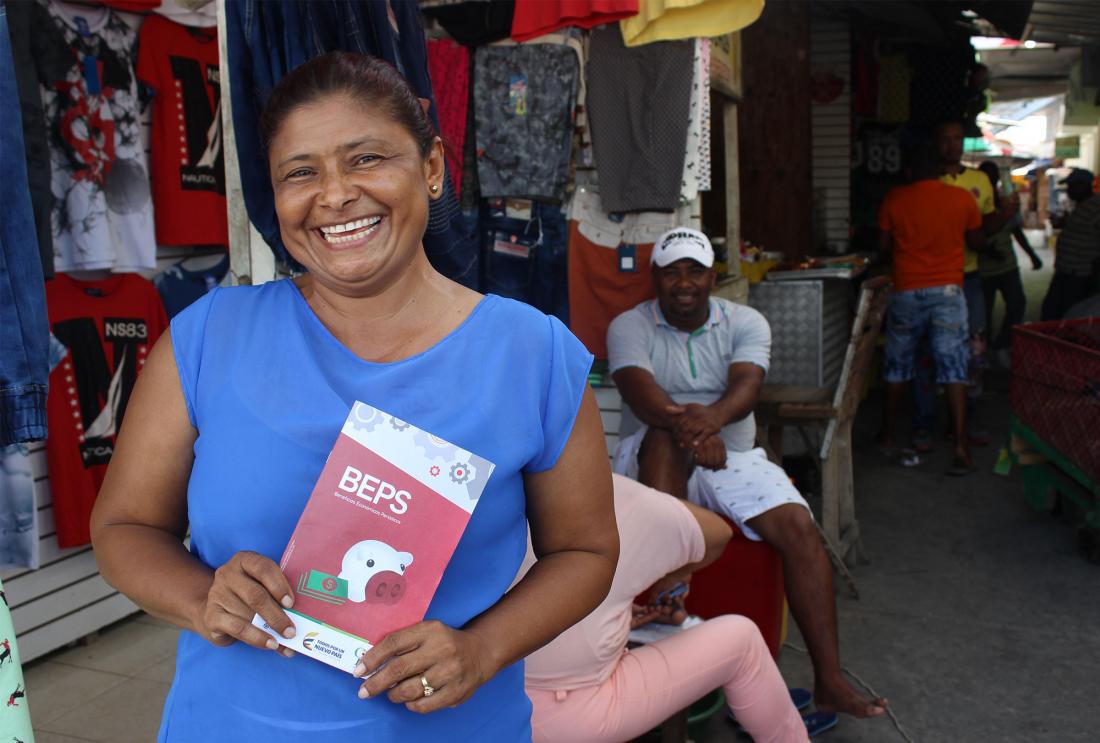 A woman holds up a BEPS pamphlet in Colombia. Photo: Colpensiones

Researchers partnered with Colpensiones to conduct a randomized evaluation to understand the effect of redesigning pension statements to be clearer and more relevant on beneficiaries’ understanding and identification of potential errors.

Researchers randomly sampled 48,072 adults affiliated with Colombia’s public pension system from three different groups to participate in this study: employees, independent workers, and a low-income group that receives a 75 percent subsidy from the government to pay their pension contributions. Researchers randomly assigned 24,016 beneficiaries from across these three groups to receive the redesigned statement. The remaining beneficiaries were sent the standard account statement and served as the comparison group.

The statements were redesigned to be more understandable and actionable, with simple, positive language, less content organized in clear segments, and explicit instructions on how to verify and correct any errors.

After the statements were mailed, the research team conducted 4,000 telephone interviews—2,000 to redesigned letter recipients and 2,000 to original letter recipients—to measure the impact of the new design on beneficiaries’ understanding of the statement and whether they managed to identify and address errors in their statements. Researchers complemented data from telephone interviews with administrative data from Colpensiones on the frequency of requests to rectify information on the statements.

Challenges in the completeness and correctness of contact data complicated both the delivery of the intervention and the data collection. One in five account statements could not be delivered due to outdated addresses on file, and more than half of the beneficiaries selected for the telephone survey could not be contacted, either because the phone number was invalid, incorrect, or because they did not answer the call. Additionally, of those who were contacted, 32 percent reported not receiving the statement even though administrative records showed it was successfully delivered.

Despite these challenges, researchers were able to measure improvements in beneficiaries’ understanding of their information and an increase in corrections requested as a result of the statement redesign, although these effects varied by beneficiary type.

Error identification and correction: Recipients of the redesigned statement reported that they were less likely to find an error that they did not already know about. However, analysis of administrative data shows that the beneficiaries that received the redesigned statement did request more corrections to their data. Specifically, independent workers were 0.6 percentage points (26 percent) more likely to request corrections to information included in the statement. The effect was similar among employees, but there was no effect among subsidized beneficiaries. It is worth noting that most requests were to correct personal data and not to correct employment history.

These results suggest that improving the design of pension account statements to be more understandable and actionable can make it easier for affiliates to review and correct, if necessary, crucial information which could impact their financial health in retirement. This study also highlights the importance of accurate and up-to-date contact information when trying to deliver program information and measure outcomes. Colpensiones has adopted the redesigned statements for all its affiliates.