Improving Voter Participation through Mobile Phones and Newspapers in Mozambique

Voter participation is an important way for citizens to guide the political process. In Mozambique, researchers evaluated if an information campaign using SMS, a hotline for electoral misconduct, and a free newspaper could affect voter turnout and other elections-related outcomes. All three programs increased voter turnout, while only distributing the newspaper strengthened demand for political accountability and reduced electoral problems. However, the effects of the programs on political participation were weaker for more socially-connected individuals; these individuals appeared to downplay the value of their own political participation as they realized that more of their peers were voting because of the programs.

Voter participation is an important way for citizens to guide the political process. An informed, mobilized electorate may be less likely to reelect corrupt politicians and more capable of holding politicians accountable, for example by demanding electoral oversight or policies in the public interest.

However, electoral participation is not guaranteed. Voters may not vote for many reasons, such as a lack of information, low trust in the electoral process, or a belief that their vote won’t make a difference given the voting patterns of others. In some cases, even when people do vote, their vote may be influenced by vote buying campaigns, violence, or other forms of interference, undermining the connection between electoral participation, political accountability, and beneficial public policies. Could providing voters with accessible electoral information and encouragement to actively engage in the political process increase their participation and demands for political accountability?

Mozambique suffered a devastating civil war from 1977 to 1992, which ended with an agreement to hold multi-party elections. Since then, the Frente de Libertação de Moçambique (FRELIMO) has won all national elections, earning an increased share of the vote in each one. Meanwhile, voter turnout has fallen rapidly, from 90 percent in 1994 to just 36 percent in 2004 (a 60 percent decline). National elections have suffered from allegations of electoral irregularities, primarily ballot fraud, carried out by FRELIMO. In addition, numerous sources point to low citizen engagement and political accountability in Mozambique. Afrobarometer data find relatively low levels of support for democracy and only one quarter of Mozambicans believe that their elected representatives are concerned with looking after their interests or listening to their opinions.1 Citizens hesitate to express opinions about politics and do not seem to see democracy as important for improving economic outcomes.

This study took place during the presidential, parliamentary, and provincial assembly elections of October 2009. The run-up to the elections was relatively calm, with FRELIMO and its candidate expected to win. The elections themselves were conducted in line with international standards, according to both international and national observers. FRELIMO won decisively, earning 75 percent of the vote in both presidential and parliamentary elections. 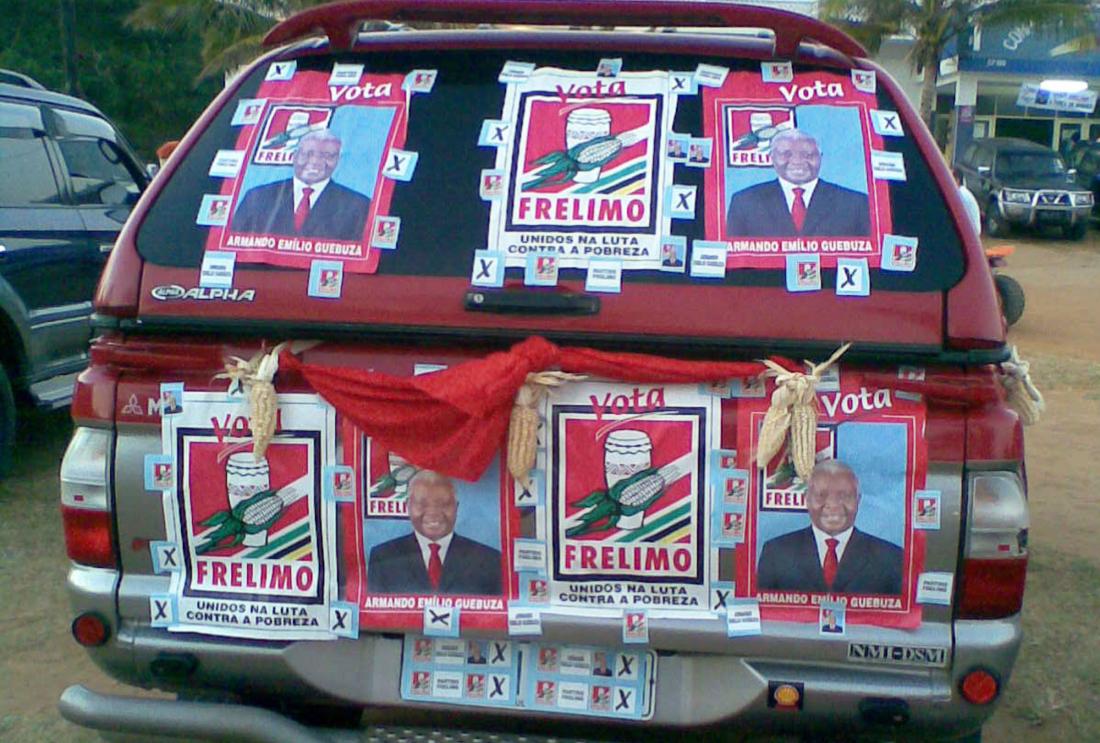 In addition to these three programs, after the interventions, elections, and a postelection survey, survey respondents at all 161 polling areas received a leaflet inviting them to send SMS messages suggesting policy priorities to the winner of the election. Because each message had a small monetary cost, researchers interpreted the act of sending a message as a measure of demand for political accountability.

Within each polling area, researchers conducted surveys on electoral behavior and perceptions before and after the elections and matched this survey data to administrative data on turnout in each polling area. In addition, researchers analyzed information on electoral problems (campaign misconduct, election-day misconduct, or violence and intimidation) collected by the national hotline of the newspaper @Verdade and election observers.

Finally, researchers gathered information about targeted and untargeted individuals’ social relationships and connectedness. This allowed researchers to determine whether individuals responded differently to the interventions if they were more socially and geographically connected to other participants; in other words, the “peer effects” of the programs.

All three programs were effective in increasing voter turnout and the level of trust in the electoral process, although each worked in a slightly different way. Only the newspaper intervention resulted in increased voter demand for accountability and reduced the prevalence of electoral problems. However, the effects of the interventions on participation were weaker for more socially-connected individuals; these individuals may have realized that more of their peers will be voting due to the different programs, thereby making their own political participation less meaningful.

Information on and Interest in Politics: On average, all three interventions increased the ability of targeted and untargeted individuals to answer basic questions about the elections (0.19 and 0.28 standard deviations, respectively). However, the programs did not tend to raise individuals’ interest in politics.

Voter Turnout: According to official polling data, all three interventions increased turnout equally, by close to five percentage points (an 11 percent increase relative to the comparison group) on average in intervention areas.

Voting Patterns: On average, the civic education program had a positive effect on the incumbent’s vote share and a negative effect on the challengers’ vote share. The newspaper intervention had the same effects to a lesser degree, and the hotline intervention did not have any effect on vote shares. One possible explanation for these effects may be that the civic education program and the newspaper, to a lesser extent, focused on neutral or positive messages about the election. Because some of the information was sponsored by the electoral commission, these positive messages may have been associated with the incumbent. In comparison, the hotline included negative messages reporting electoral problems, without a state sponsor.

Demand for Political Accountability: Only the newspaper program increased demand for political accountability, as measured by an individual’s likelihood to send a message on policy priorities to the president-elect. On average, respondents who received the newspaper were 9.1 percentage points (60 percent) more likely to send a message than those in the comparison group.

Electoral Problems: The newspaper program reduced both the incidence and intensity of electoral problems. Polling areas where @Verdade was distributed had 0.58 fewer electoral problems than comparison areas, relative to a baseline of 0.95 problems (a 61 percent decrease). These findings suggest that the newspaper was particularly effective at improving local politician behavior, perhaps due to increased perceived monitoring.

Peer Effects: Researchers found that targeted and untargeted individuals experienced similar increases in voter turnout and demand for political accountability on average, suggesting information diffused through social networks, exposing untargeted individuals to the interventions. However, the programs impacted individuals differently based on their level of social connectivity. Within intervention areas, individuals’ interest in politics increased with higher levels of social or geographic connectedness–particularly so for areas that received free copies of the @Verdade newspaper, which could be shared amongst peers. Yet socially-connected individuals in intervention areas, whether they were targeted or not, were less likely to vote or send a message to the president-elect than those with fewer social connections. A socially-connected individual may have realized that more of their peers would be voting due to the different interventions, thereby making the individual’s own political participation less meaningful. This is in contrast to socially and geographically connected individuals in comparison areas, who were more likely to vote than less-connected community members.

Altogether, these results suggest that increasing citizens’ information and participation opportunities can affect their behavior as voters–though these effects may be different based on how socially connected an individual is–and that the tool used to deliver this information is important. Furthermore, presenting information about the elections in a neutral or positive light can boost support for the incumbent when the distinction between state and party is not clear. Based on these findings, researchers suggest that incumbents may have learned ways to bend the electoral system in their favor beginning well before election day. Thus, while there is value in making elections more transparent, those efforts alone may not be sufficient to encourage genuine electoral competition.

In the follow-up of this study, newspaper @Verdade implemented hotlines for a number of national events, using the same platform that was introduced for the research (ushahidi). This included Maputo riots in 2010, and elections in both 2013 and 2014. The websites for these events were among the most prominent sources of news about Mozambique during those times (both nationally and internationally). @Verdade continued its focus on civic education with particular efforts during electoral periods. The use of text messages and internet platforms became central to the newspaper’s activity. The electoral commission in Mozambique, in both its political (CNE) and technical (STAE) branches, is aware of the results of this research and has taken it into account in the design of its civic education activities.