Past Felony Conviction, Participation, and Political Reintegration in the United States

In the United States, nearly all individuals lose the right to vote while incarcerated, and even after voting rights are restored upon release voting rates among people with a record of felony conviction remain low. Researchers evaluated the impact of mailings that informed people with a record of felony conviction of their eligibility to vote on political participation. The mailing increased political participation, particularly among individuals that were active voters prior to incarceration.

The state of Connecticut prohibits incarcerated individuals with a felony conviction from voting—like 47 other states—but, for some of them, restores their voting rights after release from prison and parole. For the purposes of this study, researchers included individuals that had not been convicted of a violent crime, served more than three years in prison, and were not registered to vote as of 2012. They served an average sentence of one year, and the most commonly committed crimes include possession or sale of narcotics, burglary, and violating protective orders. Overall, this sample constitutes 53 percent of all people with a felony conviction released between summer 2009 and summer 2012 in Connecticut. 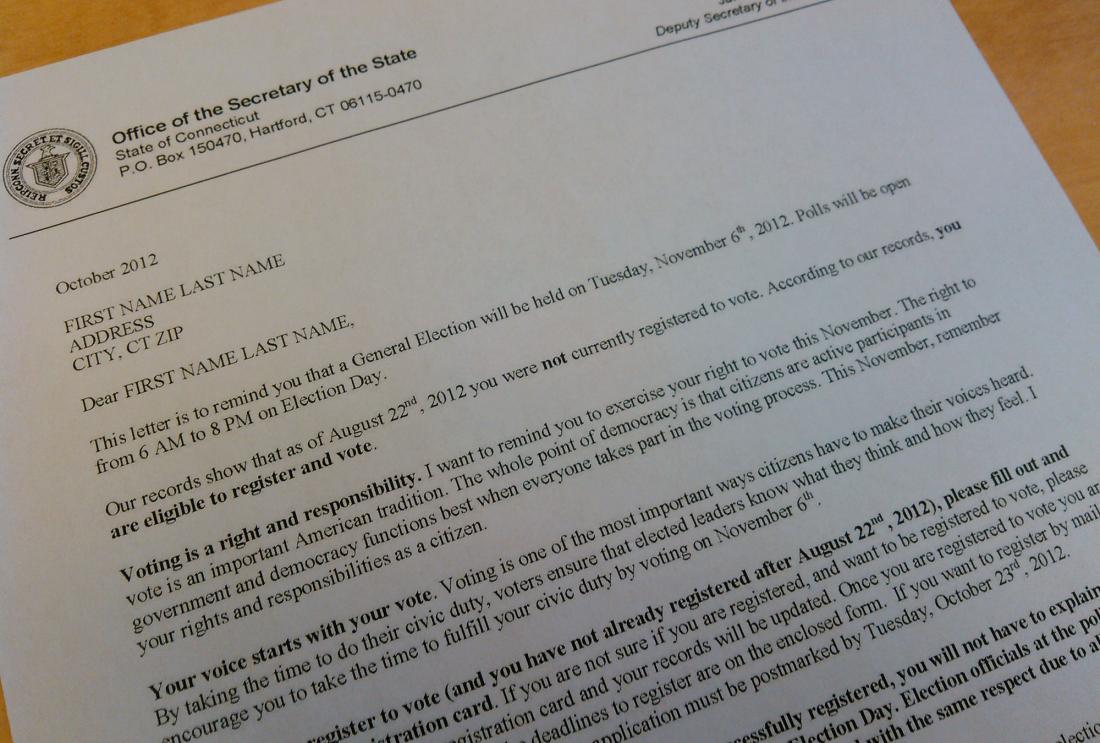 Researchers evaluated the impact of mailing voting rights information to people with a record of felony conviction on their political participation (Sample letter courtesy of Gerber et al.)
From paper's supporting information

In partnership with the Connecticut Secretary of State, researchers evaluated the impact of mailing voting rights information to people with a record of felony conviction on their political participation. Among eligible individuals researchers randomly assigned half to the treatment group (3,146 individuals), who received a mailing reminding them of their eligibility to register to vote. The other half did not receive any mailings and served as the comparison group.

Roughly a week before the mail-in voter registration deadline for the November 2012 election, each individual in the treatment group was sent a mailing from the Secretary of State. The mailing contained an official mail-in voter registration card and a letter from the Secretary of State. The letter stated that despite the recipients’ voter eligibility, they were not currently registered. The letter did not identify the recipient as having a past felony conviction. In addition, the letter provided information on the upcoming election and how to register, as well as appeals to civic duties and the responsibility to vote.

Individuals who were sent a mailing informing them of their eligibility were more likely to both register and vote. Voter registrations rose by 1.8 percentage points, a 30 percent increase from the 5.9 percent of the comparison group who registered. The proportion of people with a record of felony conviction that ultimately voted also increased 30 percent, from 3.0 percent in the comparison group to 3.9 percent in the treatment group.

Mailings had the largest impact on individuals who had voted prior to their incarceration, suggesting that people who have voted in the past may be more receptive to outreach. The impact of the mailing increased re-registrations by 8.4 percentage points and turnout by 7.7 percentage points among individuals who voted in the 2008 evaluations as compared to those who did not.

These result suggest that informing people with a record of felony conviction of their voting eligibility may be an effective way to reduce the negative impact of incarceration on political participation.