Price Sensitivity and Usage of Formal Transportation in Rural Malawi

Access to transportation is generally considered to be a fundamental determinant of economic growth and a significant factor in an individual’s health, schooling, and economic status. In Malawi, researchers studied the introduction of a daily minibus service that connected five rural villages and the nearby market town. Although a majority of households used the new bus service, demand was very sensitive to price and was never sufficient to cover operational costs. This suggests that upgrades to transport infrastructure in rural areas will not necessary lead to greater access to affordable transport services.

Transportation and access to services is generally considered to be a fundamental determinant of economic growth and a significant factor in an individual's health, schooling, and economic status. Isolation is thought to limit opportunities in rural areas due to restricted access to goods, higher costs to transport crops and agricultural inputs, and the lack of demand for non-agricultural services. As a result, there has been a large push in the development community to increase investment in rural roads. However, this approach assumes that road condition is the main determinant of transport costs and that the existence of a good quality road will automatically lead to the provision of public transportation and improved access to services. There is little evidence to date, however, on the exact economic and social benefits of the provision of rural roads.

Malawi has one of the least developed transportation infrastructures in Sub-Saharan Africa. Of all the unpaved roads in the country, 48 percent were judged to be in poor condition in 2005 and one study of road conditions in Malawi found that 38 percent of villages were not accessible by motorized vehicles for the five-month rainy season.

The study was implemented in a cluster of five villages in rural Malawi. Prior to the study, no regular motorized passenger transportation existed on the road between the villages and the closest market town, which was 17 kilometers away. Travel outside the village cluster was infrequent, and most transport was by foot or bicycle. There was a weekly market in the closest town as well as an agricultural input supplier and crop purchaser, a government health clinic, a post office, ten maize mills, and dozens of kiosks that sold small items and food. While there were no permanent banking services in the market town, a mobile banking service made weekly visits to the market town to collect deposits and facilitate withdrawals. 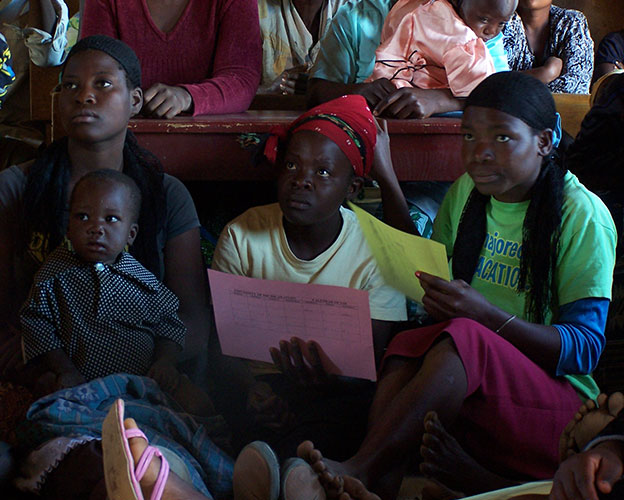 A lottery to randomize bus prices in rural Malawi.

In order to understand how roads in relatively good condition in rural areas impacts public transportation provision, a daily minibus service that connected five rural villages and the nearby market town was subsidized over a four-month period.

The intervention was divided into two phases. In the first phase, which was intended only to measure take-up of public transportation, 100 households were randomly selected to receive a bus pass that allowed the members of that selected household to use the bus at zero cost to travel to and from the market town. In the second phase, to measure the impact of price on take-up, 406 households were randomly assigned to one of seven bus pass prices. After completion of a baseline survey, a meeting was called at each of the five villages. At the meeting, one member of each household was asked to select a ticket from a bucket to determine the price of one round trip on the project bus. Prices varied between zero and 500 Malawi Kwacha (US$3.57). After the household member was assigned the lottery ticket, the number was recorded and the price was stamped on the household's bus pass. Any member of the household could use the pass but had to pay the stamped price.

On all trips a conductor was present to check bus passes, collect bus fares, monitor cargo loading, and conduct rapid trip-purpose surveys of all passengers. Minibus owners and drivers near the market town were also interviewed in order to obtain a broader understanding of the market for transportation in the region.

Policy implications: Based on take-up and interviews with minibus owners and drivers, the results suggest that at any price, a bus operator will never make enough revenue to break even on this road. If road construction or rehabilitation does not generate transport provision, than the investment will not lead to the provision of services for the local population and will have been largely wasted. It is important to consider transport services provision when considering infrastructure upgrades in rural areas.