If parents are aware of a school subsidy, they may spend less on their children’s education, offsetting or potentially eliminating the benefit of a subsidy program. Researchers studied how a school grant program affected learning outcomes and household spending. After the first year of the grant program, students in treatment schools performed significantly better than those in comparison schools. However, in the second year, households anticipated the additional funds, so for each dollar provided to schools in the second year, household spending declined by US$0.76. At the end of the year, the program no longer had any detectable impact on student learning.

While India has made substantial progress in improving access to primary schooling and primary school enrollment rates, average learning levels remain very low. Around the time of this evaluation, nearly 60 percent of children aged 6 to 14 in rural India could not read at the second-grade level, even though over 95 percent of them were enrolled in school.1 While traditional approaches to improving student learning often focus on providing schools with more resources, such as textbooks or flipcharts, the evidence on the effectiveness of such programs is mixed. Part of this ambiguity may be due to an uncertainty about how households will change their spending on education in response to subsidized school inputs. If parents are aware of the school subsidy, they may spend less on their children’s education, offsetting or potentially eliminating the benefit of the program. However, until recently, few evaluations have accounted for a household's response to education input programs.

Andhra Pradesh2 is the fifth largest state in India, with a population of over 80 million, 73 percent of whom live in rural areas. There are over 60,000 government-run primary schools in the state, which serve around 80 percent of rural children. The average rural primary school is quite small, with a total enrollment of around 80 to 100 students and an average of 2-3 teachers across grades 1-5. The government provides schools with an annual grant of INR 2,000 (US$44) for school improvements and INR 500 (US$11) for each teacher to purchase classroom materials. However, compared to the annual spending on teachers' salaries, over INR 30,000 (US$667) per school, the amount spent on learning materials is small. 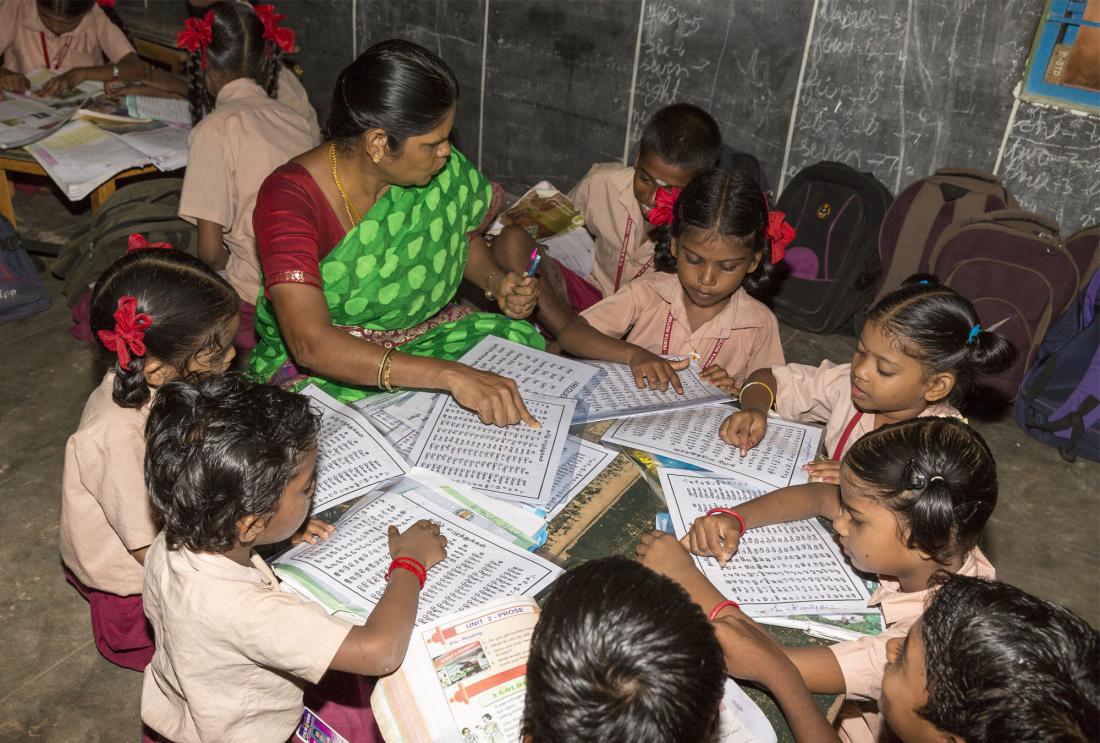 The school block grant program was evaluated as part of a larger education research initiative across 500 schools, known as the Andhra Pradesh Randomized Evaluation Studies (AP RESt), which tested several different education interventions, including teacher performance pay, contract teachers, and diagnostic feedback. In the block grants arm, 100 schools from across five districts were randomly assigned to the treatment group, and 100 were assigned to the comparison group.

Two months after the start of the 2005 school year, program staff visited each school in the treatment group to explain the details of the block grants program. The amount of the grant was set at INR 125 (US$3) per student per year. Each school had the freedom to decide how to spend the block grant, with the condition that the funds were to be spent on inputs used directly by the students and not on infrastructure or construction projects. Schools were given a few weeks to make a list of the items they would like, and then teachers worked with project staff to procure the materials. This method of grant disbursal allowed schools to choose the inputs they needed, but limited potential corruption.

Student test scores: Consistent with changes in household spending, students in treatment schools performed significantly better than those in comparison schools at the end of the first year, scoring 0.08 and 0.09 standard deviations higher on language and math tests, respectively. In the second year, however, there were no significant difference in test scores between students in treatment schools and those in comparison schools. These results suggest that, while the original effect of the school grants on test scores was positive, the effects were lower once households adjust their own spending.

Researchers found similar results in another non-randomized study in Zambia. Together, these studies suggest that unexpected school grants do not affect households’ private educational spending, and can increase student learning. But anticipated school grants can reduce private educational spending with no impact on student learning.

In light of these results, one alternative policy option for school subsidy programs may be to focus on providing schooling inputs that parents would not likely provide otherwise, such as investments in improving classroom pedagogy.

1.
Muralidharan & Sundararaman. 2011. "Teacher Performance Pay: Experimental Evidence from India." Journal of Political Economy 119 (1): 39-77.
2.
In 2014, Andhra Pradesh was separated into two states—Telangana and Andhra Pradesh. This summary refers to the formerly unified Andhra Pradesh at the time of the evaluation.