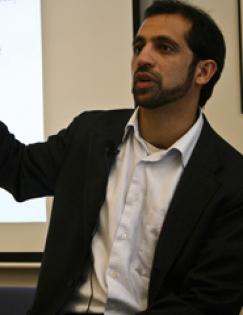 Asim Ijaz Khwaja is the Sumitomo-FASID Professor of International Finance and Development at the Harvard Kennedy School. He previously served as a member of J-PAL's Board of Directors. His areas of interest include economic development, finance, education, political economy, institutions, and contract theory/mechanism design. His research combines extensive fieldwork, rigorous empirical analysis, and microeconomic theory to answer questions that are motivated by and engage with policy. It has been published in the leading economics journals, such as the American Economic Review, and the Quarterly Journal of Economics, and has received coverage in numerous media outlets such as the Economist, NY Times, Washington Post, International Herald Tribune, Al-Jazeera, BBC, and CNN. His recent work ranges from understanding market failures in emerging financial markets to examining the private education market in low-income countries. He was selected as a Carnegie Scholar in 2009 to pursue research on how religious institutions impact individual beliefs. Khwaja received BS degrees in economics and in mathematics with computer science from MIT and a PhD in economics from Harvard. A Pakistani, UK, and US citizen, he was born in London, U.K., lived for eight years in Kano, Nigeria, the next eight in Lahore, Pakistan, and the last eighteen years in Cambridge, Massachusetts. He continues to enjoy interacting with people around the globe.

1 result(s)
Can we support SME growth by increasing demand for their products?