Last updated:
Accurate information can help people determine which behaviors lead to improved health outcomes, but information alone is not necessarily sufficient to motivate adoption of these behaviors. When the primary barrier to the adoption of a healthy behavior is lack of awareness, information that is framed in a specific and actionable way, conveyed through effective messengers or spread through technology platforms, can be particularly effective. When the cost or the effort required to adopt a behavior is a concern, it may be necessary to also provide incentives or income support in the form of cash transfers. 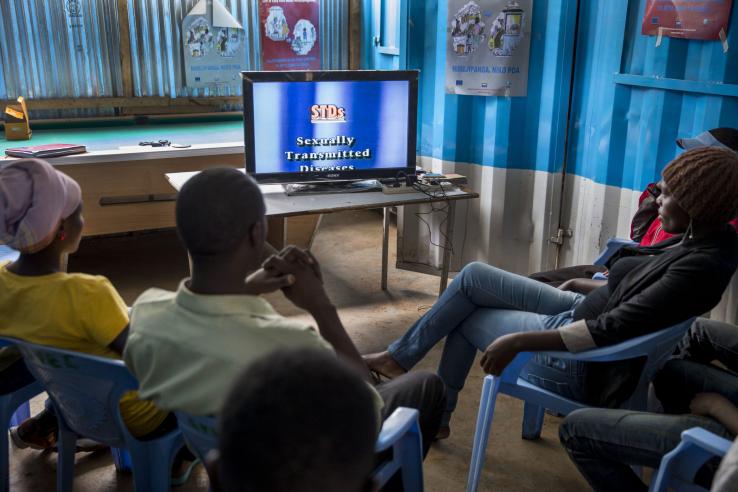 People often do not seek out health services, even when those services are readily accessible, or adopt behaviors that could improve their health. In some cases, this is due to lack of accurate information, the information not being salient, mistrust of the health system, or lack of confidence that the behavior could be effective. When one or more of these challenges are present, information provision might be effective at increasing use of services.

A review of 34 studies from low-, middle-, and high-income countries demonstrates that information is necessary for motivating behavior change, but it is not necessarily sufficient. The framing of information, the messenger, and the platform through which the information is conveyed can each play a role in whether the information influences an individual to take up healthy behaviors.

Policymakers who are seeking to encourage healthier behavior in contexts where a gap in knowledge is a primary barrier should consider implementing information campaigns. Campaigns that contain actionable and specific messages, are disseminated through influential messengers or peers, and/or spread through wide-reaching platforms have been shown to be particularly effective. However, if take-up of the desired behavior incurs financial or nonfinancial costs, it may be necessary to accompany the information with material support to reduce barriers to access, including small financial or nonfinancial incentives or income support.

Choosing effective messengers for the local context is critical for building confidence and trust to encourage behavior change. One reason why individuals may not adhere to public health recommendations is a mistrust of the recommendations or of the health system. Depending on the underlying reasons for the mistrust, certain messengers may be more effective at overcoming it. For instance, in the United States, Black individuals have long faced discrimination in the health system and on average report higher levels of mistrust of health recommendations. Two separate studies found that physicians who were Black were more effective at eliciting behavior change or the seeking out of additional information among Black patients.[3][4] While racial alignment was a key element of trust-building in these examples, evaluations in other contexts may find that other characteristics of a messenger, such as their ethnic background, status as an immigrant, or caste, are more important. The characteristics that matter will depend on the underlying reasons for mistrust, and additional research can help to identify what they are.

Peers and other members of a social network are often powerful means of spreading information about health products and behaviors. Five studies[1][6][18][22][29] found that when an individual takes up a certain health behavior or product, their peers are more likely to do so as well. Individuals may notice the behavior change and become convinced to emulate it, or they may learn about the benefits of a new product from their peers. In Kenya, the neighbors of those who received a large subsidy to obtain an insecticide-treated malaria bed net were more likely to purchase a bed net themselves.[18] In Nepal, the friends of girls who received a menstrual hygiene cup were 18.6 percentage points more likely to use one as well.[29]

Information spread through one’s social network is often effective at eliciting behavior change, even if the original messenger did not adopt the recommended behavior. This may be because information from a known source is more salient or convincing. For example, in India, well-connected individuals in a community were particularly effective at spreading important information on routine child immunization. Leveraging the voices of these individuals increased child attendance at immunization camps by 27 percent relative to leveraging the voice of a random community member.[7]

Open questions remain, however, on how to leverage social networks in different contexts. In Nicaragua, parents were sent information about parenting practices via text message with the intention of improving early childhood development. When local opinion leaders who typically provide information on early childhood development, such as community health workers and preschool teachers, also received these messages, parental investments in nutrition dropped and child cognitive outcomes worsened. In this context, targeting local leaders hence did not help to amplify the messages.[10]

Using technology, including entertainment media, SMS messages and social media such as Twitter and WhatsApp, can amplify the reach of messages. Entertainment media (or “edutainment”) can help to shift behaviors by embedding educational messages in a bigger storyline.[8][9][23][26] In Nigeria, an informational television series called MTV Shuga reduced risky sexual behavior and increased the likelihood of getting tested for HIV. Effects were stronger for viewers who reported being more involved with the story or identifying with the characters.[9] However, evidence is mixed on whether edutainment can impact attitudes,1 which may in part be a function of the difficulty of accurately measuring attitudes.

SMS, WhatsApp, and social media platforms, such as Twitter and Facebook, are a vital part of information-sharing in the 21st century. Four studies[2][6][13][15] show that leveraging them can be an effective means of amplifying messages to shift beliefs and behaviors. As with other types of information-sharing, conveying information through these platforms is particularly effective when the messenger is trusted and information is framed in a specific and actionable manner. For example, during the Covid-19 pandemic, individuals in India received SMS messages containing a link to videos from a trusted, well-known expert advising individuals to report Covid-19 symptoms and follow local guidelines. These messages reached millions of people and led to a doubling of reporting of symptoms and decreased travel.[6]

Because they can also be a source of misinformation, monitoring online platforms for false messages can help identify situations where correcting misconceptions is particularly important. In Zimbabwe, a local civil society organization sent WhatsApp messages to their newsletter subscribers to convey truthful information about Covid-19 and to debunk misinformation about fake cures. These messages from a trusted source increased knowledge about Covid-19 and reduced self-reported harmful behavior such as violating lockdown orders. [13]

Nonfinancial costs like effort may also reduce the impact of information. For instance, if taking up healthy behaviors would require the individual to travel a significant distance to a health clinic, accompanying the information with a mechanism of material support, such as a small financial or nonfinancial incentive or a larger cash transfer, may be more effective. In Nepal, mothers who received information about child nutrition as well as cash gained more knowledge and their children had better cognitive development, relative to those who only received information.[28] This aligns with a larger body of evidence that providing supplemental income alongside information can both incentivize households to change their behavior and provide income to facilitate the behavior change. A lottery system that is less expensive but provides all who change their behavior with an equal chance of winning a larger sum of money can also be effective.[12][33][34] In Lesotho, a lottery that gave those who tested negative for sexually transmitted infections the possibility of winning $50 every four months reduced HIV incidence by 21.4 percent.[12]

Low take-up due to perceived or real side effects of the behavior may be more difficult to overcome. In Malawi, only about a third of households eligible for free chlorine elected to use it to treat their water. Community health workers tasked with informing households about the importance of chlorine use were ineffective at increasing chlorine usage among beneficiaries. The distaste for water purified using diluted chlorine was difficult to overcome through awareness alone.[19]

Messages framed in a specific and actionable way that are conveyed through effective messengers or spread through technology platforms can help individuals adopt healthy behaviors if lack of information was the primary barrier. However, additional measures may be necessary when the cost or the effort required to adopt a behavior is a concern.

Abel, Martin and Willa Brown, "Prosocial Behavior in the Time of COVID-19: The Effect of Private and Public Role Models." Working Paper, April 2020.

Banerjee, Abhijit, Sharon Barnhardt, and Esther Duflo. "Movies, Margins, and Marketing: Encouraging the Adoption of Iron-Fortified Salt." In Insights in the Economics of Aging, edited by David Wise, 285–206. Chicago: University of Chicago Press, 2017.

Bowles Jeremy, Horacio Larreguy, and Shelley Liu. 2020. “Countering Misinformation via WhatsApp: Preliminary Evidence from the COVID-19 Pandemic in Zimbabwe.” PLOS One 15, no. 10.

Jalan, Jyotsna and E. Somanathan. 2008. “The Importance of Being Informed: Experimental Evidence on Demand for Environmental Quality.” Journal of Development Economics, 87: 14–28.