The Graduation Approach during the Covid-19 Pandemic: Building Resilience among Ultra-poor Households in Bihar

Researchers
Shagun Sabarwal
Researchers assessed the economic shock, health knowledge, and access to social protection schemes among poor women in rural Bihar, a state in central India, in this descriptive study. Telephonic surveys were conducted with beneficiaries of a livelihoods scheme for ultra-poor women launched by the state government as a scale-up of the Graduation Approach as well as self-help group (SHG) members. Survey findings and subsequent government actions indicate that the Graduation Approach is an important pathway for economic inclusion amid the Covid-19 crisis.

The “Graduation Approach” is a multifaceted livelihoods program that has been implemented in countries across the world by providing ultra-poor and women-headed households with a productive asset, training, mentoring, access to savings, and consumption support to help them graduate from extreme poverty. In 2018, the program was scaled up to 100,000 ultra-poor households in Bihar by the Bihar Rural Livelihoods Promotion Society (BRLPS), also known as JEEViKA, through the Satat Jeevikoparjan Yojana (SJY), a livelihoods scheme targeting ultra-poor women.

Following the onset of the Covid-19 crisis and recognizing the likelihood of diminished income and the associated risk of food insecurity among ultra-poor households, JEEViKA deployed the existing SJY architecture to extend cash support of INR 2000 to beneficiaries of the SJY program.

This descriptive study builds on telephonic surveys in which researchers assessed the economic shock of the nationwide lockdown, health knowledge and access to social protection schemes among poor women in Bihar:

Given that the surveys found that many SJY beneficiaries and SHG members could not recall Covid-19 symptoms and reported cutting down the size of their meals to tide them through the lockdown, raising Covid-19 awareness among ultra-poor women in Bihar and connecting them to existing social protection schemes remains important.

While the lockdown affected the women’s ability to run and develop their enterprises, they had access to a source of income even as other sources such as casual labour broke away. Researchers found that the Graduation Approach is an important pathway for economic inclusion amid the Covid-19 crisis: investing in the Graduation Approach in Bihar before the pandemic enabled the government to quickly extend financial and mentoring support to ultra-poor households once the crisis began.

Raising Covid-19 awareness: While almost all households, both SJY beneficiaries and SHGs, reported that they had heard about Covid-19 (98.1 percent and 99.6 percent respectively), 39 percent of women under SJY and 28 percent of SHG members were unable to recall even one symptom of the disease (Figure 1). JEEViKA has since ‘mainstreamed’ raising Covid-19 awareness into the daily work of frontline workers. 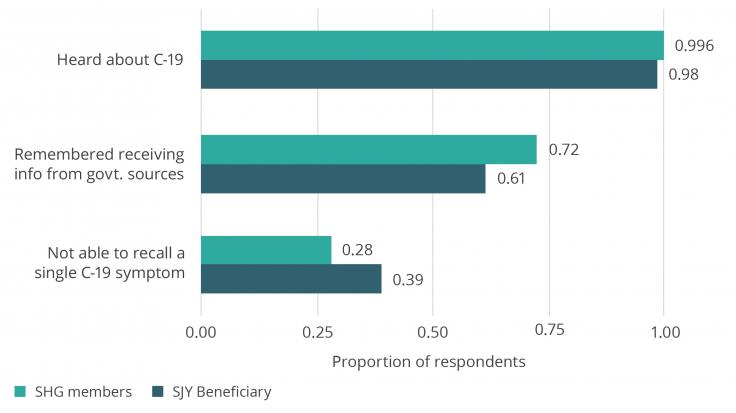 While the lockdown affected SJY beneficiaries’ ability to run their microenterprises, many still had a source of income when other income sources dwindled: In August 2020, over half (53 percent) of SJY beneficiaries reported that they were able to run their microenterprises continuously since national lockdown had been announced. This implies that many SJY beneficiaries had access to a source of income even as other income opportunities, such as casual labor, disappeared. Only 28 percent of respondents reported that they had run their businesses “for some of the time” and less than one-fifth (18 percent) didn’t run them at all since the national lockdown was announced. For eight out of ten households that were running their microenterprises at the time of the survey, monthly sales in the previous 30 days were lower than the average monthly sales prior to the lockdown, a factor that may limit future enterprise development.