Since the early 2000s, there has been an increase in government-run health insurance schemes in low- and middle-income countries that aim to achieve universal health coverage. One key challenge in countries where the informal sector is a large part of the economy is that non-poor informal workers are less likely to enroll and retain in government health insurance programs, as they are outside the formal tax system. Researchers conducted a randomized evaluation to test the impact of various programs, including subsidies, registration assistance and information campaigns on the enrollment and retention of non-poor informal workers in Indonesia’s national health insurance program. Registration assistance and subsidies both increased household enrollment, but overall enrollment rates remained low.

Since the early 2000s, low- and middle-income countries have increasingly been implementing government-run health insurance schemes to provide universal health coverage for their citizens. Such coverage could increase access to key health services and prevent people without insurance from falling into or deeper into poverty due to the cost of health care when they get sick.

However, implementing a sustainable health insurance scheme can be difficult. Non-poor informal workers make up a large portion of the workforce in many low- and middle-income countries but are typically less likely to enroll and remain in insurance programs. Governments can enroll formally-employed individuals through their employers, and enroll low-income individuals by providing them with subsidized insurance, but these methods do not reach non-poor informal workers. Additionally, if only the least healthy individuals opt in to the insurance program, the provider would need to cover more claims, which would increase the cost of premiums, and cause further dropout. To ensure the viability of health insurance schemes, governments must encourage healthy individuals and informal sector workers to sign up for coverage.

Non-poor informal workers, who make up about 30 percent of Indonesia’s workforce, are required to individually register for JKN and make monthly premium payments. Families are required to enroll in the JKN program either in person at an office in the district capital or online through the program website. To register, households must fill in a form and present an updated Family Identity Card (Kartu Keluarga), the ID card of the family member that is doing the registration, and color photographs of each family member. According to Indonesia’s Social Security Agency for Health (BPJS Kesehatan), 60 percent of Indonesia’s non-poor informal workers still remained uninsured as of 2020. Potential barriers for individuals not signing up could be the high premium and the hassles for enrollment process.

Retention is another challenge: individuals can enroll in health insurance at any point during the year. This creates incentives for households to delay coverage until one gets sick and— despite penalties if someone drops coverage and then tries to reactive it—to drop coverage once one recovers. 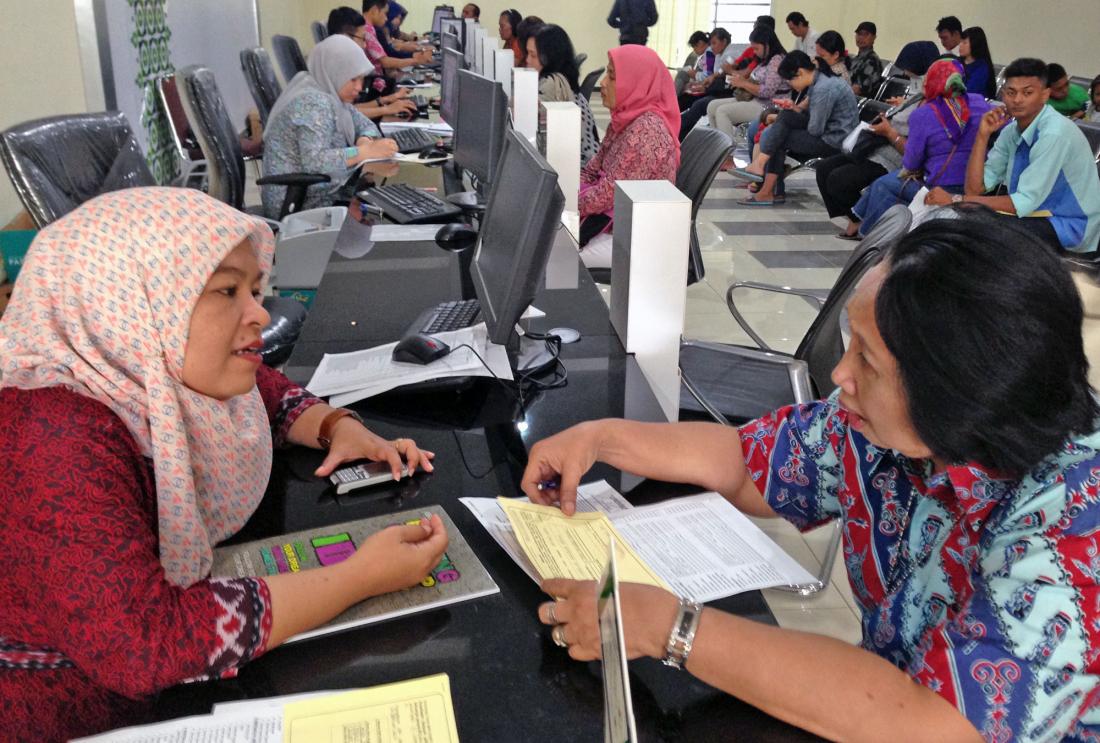 In 2015-2018, researchers worked in close partnership with the Indonesian Social Security Agency (BPJS), National Planning Agency (BAPPENAS), National Team for the Acceleration of Poverty Reduction (TNP2K), and Executive Office of the President of the Republic of Indonesia (KSP) to test the impact of different incentives and information campaigns on the enrollment and retention of non-poor informal workers in the JKN health insurance program.

Researchers randomly assigned 5,996 households from the cities of Bandung and Medan to receive a combination of the following interventions or to serve as part of the comparison group.

Researchers collected household survey data and administrative data to measure the interventions’ effects attempted and actual enrollment, coverage, and claims. In addition, researchers also examined the effects of the subsidies on government revenues.

Providing temporary subsidies increased enrollment and retention with no additional cost to the government. However, many of those who attempted to enroll failed to complete their registration. Providing additional information showed no impact.

Less than one-fifth of households who attempted to enroll were successful in doing so. Households who received subsidies showed an increase in attempted enrollment by 23.7 percentage points relative to the comparison group (of whom 8 percent enrolled), but less than one-fifth of the households were successful in completing the registration process. Households reported issues with providing official identification documents as a key barrier.

In 2016, findings from the evaluation provided input to the National Development Planning Agency and Indonesia’s Social Security for Health on a policy debate around JKN’s pricing strategy. The results informed the Government of Indonesia’s decision to avoid raising premiums between 2016 and 2019.

However, the long-term results of the study also suggested challenges in ensuring the program’s financial sustainability. In October 2019, the Ministry of Finance increased premiums for all healthcare classes for the options of schemes of its contributory JKN Mandiri program: lowest premium (class III), middle premium (class II), highest premium (class I).