Graduating the Ultra-Poor in Ghana

More than one fifth of the world’s population lives on less than US$1.25 per day. While many credit and training programs have not been successful at raising income levels for these ultra-poor households, recent support for livelihoods programs has spurred interest in evaluating whether comprehensive “big push” interventions may allow for a sustainable transition to self-employment and a higher standard of living. To test this theory, in six countries researchers evaluated a multi-faceted approach aimed at improving the long-term incomes of the ultra-poor. They found that the approach had long-lasting economic and self-employment impacts and that the long-run benefits, measured in terms of household expenditures, outweighed their up-front costs. This evaluation summarizes the Ghana site, which had similar effects as the other successful sites. It also found that offering assets or facilitating access to a savings account alone did not improve outcomes.

More than one fifth of the world' s population lives on less than US$1.25 per day. Many of these families depend on insecure and fragile livelihoods, including casual farm and domestic labor. Their income is frequently irregular or seasonal, putting laborers and their families at risk of hunger. Self-employment is often the only viable alternative to menial labor for the ultra-poor, yet many lack the necessary cash or skills to start a business that could earn more than casual labor.

In the past, many programs that have provided poor households with either credit or training to alleviate these constraints have not been successful at raising household income levels on average. However, in recent years, several international and local nongovernmental organizations have renewed their support for programs that foster a transition to more secure livelihoods. Combining complementary approachesthe transfer of a productive asset, training, consumption support, and coaching into one comprehensive program may help spur a sustainable transition to self-employment. To better understand the effect of these programs on the lives of the ultra-poor, researchers conducted six randomized evaluations in Ethiopia, Ghana, Honduras, India, Pakistan, and Peru.

In Ghana, researchers partnered with implementing organizations Innovations for Poverty Action and Presbyterian Agricultural Services (PAS). The study took place in the Northern and Upper East regions of Ghana, a region that is disproportionately poorer than the coastal south. Fifty-three percent of households in the study were living on US$1.25 a day or less when the study began in 2011, compared to 29 percent in Ghana as a whole.

To select the poorest members of the communities, the project team conducted a Participatory Wealth Ranking, in which villagers collectively ranked households according to their wealth during a community meeting. PAS conducted a short survey afterwards to verify the results of the ranking. 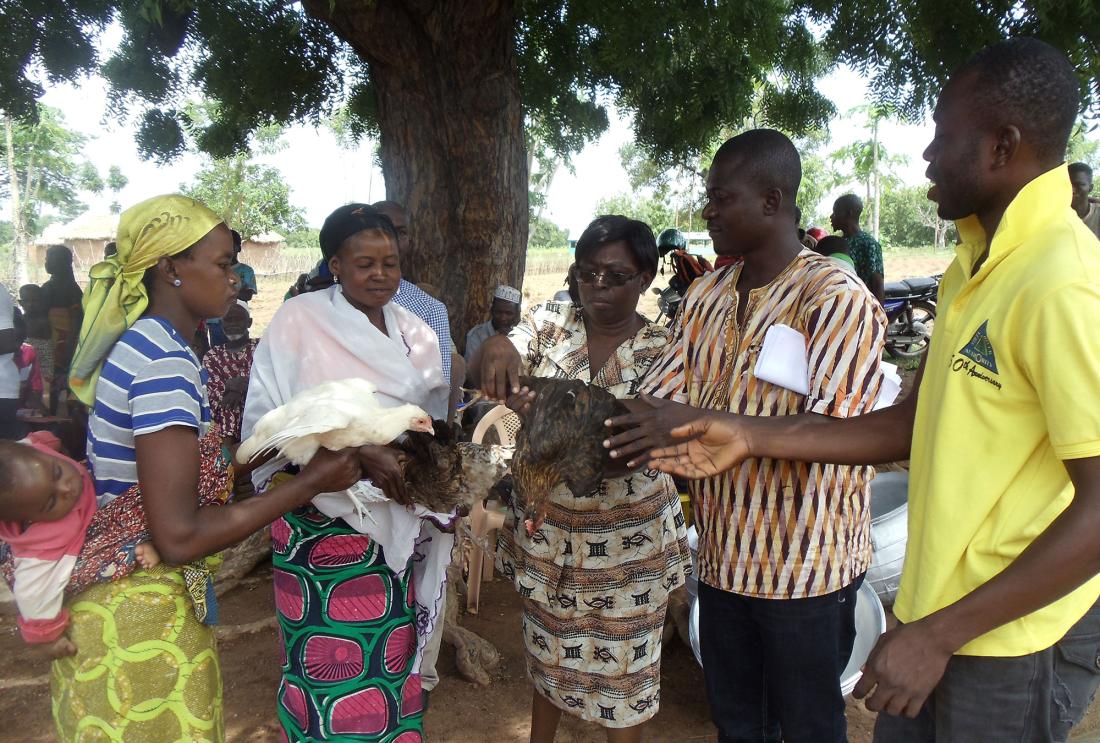 Researchers conducted a randomized evaluation to test the impact of a two-year comprehensive livelihoods program ("the Graduation approach") on the lives of the ultra-poor in northern Ghana. The approach was first developed by the Bangladeshi NGO BRAC in 2002 and has since been replicated in several countries. The Graduation program consisted of six complementary components, each designed to address specific constraints facing ultra-poor households:

In Ghana, researchers first randomly assigned villages composed of a total of 2,606 households, to one of two groups. One group served as a pure comparison group and was not offered the program. In the other group, 666 households were randomly assigned to receive the program. The other half of the households in that group did not receive the program, and served as a sub-comparison group to measure "spillover" effects on non-participating households living nearby. The program consisted of six complementary components, each designed to address specific constraints facing ultra-poor households:

Researchers conducted the first endline survey immediately after the two-year program ended, as well as a second endline survey around one year later.

Across all six countries, researchers found that the full graduation program caused broad and lasting economic impacts. Treatment group households consumed more, had more assets, and increased savings. The program also increased basic entrepreneurial activities, which enabled the poor to work more evenly across the year. While psychosocial well-being improved, these noneconomic impacts sometimes faded over time. In five of the six studies, long-run benefits outweighed their upfront costs. However, offering the components of the program separately did not lead to significant improvements in household outcomes.

In Ghana, households that participated in the full Graduation program saw similar effects to the other countries one year after the program ended:

Psychosocial wellbeing: Households that participated in the program did not report feeling significantly less stressed or happier than households in the comparison group.

Cost-benefit analysis: Researchers calculated total implementation and program costs to be US$1,777 per household (2014 PPP US$5,408). However, estimated benefits of consumption and assets growth amount to 2014 PPP US$7,175 per household, representing an overall 133 percent return on investment.

Finally, there is no evidence that either SOUP or assets alone had a positive, long-term impact on health, mental health, political involvement, time at work, or female empowerment.

Overall, these results demonstrate that the graduation program with all of its components can have meaningful and sustainable economic impacts. However, the individual components alone are less successful in creating meaningful impact.

5 result(s)
What data can do to fight poverty
We can end poverty, but at what cost?
Graduation from destitution
Video: Creating sustainable livelihoods for the poorest
New data reveals which approach to helping the poor actually works