Poverty in early childhood, experienced by 1 in 6 children in the United States, is not only associated with lower academic achievement, reduced earnings, and poorer health, but also with differences in the structural development of brains. To understand the causal impact of poverty reduction on neurodevelopment, researchers randomly assigned new mothers to receive an unconditional cash transfer of $333 per month. Researchers then measured brain activity among the mothers’ children near their first birthday. Poverty reduction had an effect on the children’s brain activity, as children in families who received the transfer displayed different brain activity patterns than children whose mothers received a nominal sum of $20 a month. The activity pattern found in the high-cash group has been correlated in other studies with higher language, cognitive, and social-emotional functioning later in childhood and adolescence, though more research is needed.

In 2020, nearly 12 million children (16 percent) were living in poverty in the United States, an increase of more than 1 million from 2019 fueled by the Covid-19 pandemic’s ongoing impact on economic insecurity. Early childhood poverty disproportionately affects children of color, as 28 percent of Black children and 23 percent of Hispanic children grow up in poverty, compared to just 10 percent of white children.

Early childhood poverty is not only associated with penalties to socioeconomic outcomes such as lower educational attainment and future earnings, but with differences in brain structure and activity. While family income shows little relationship to child brain activity at birth, it quickly begins to predict brain activity patterns as children grow. Some studies have found that children in low-income families are more likely to exhibit brain activity patterns that are associated with lower cognitive, social-emotional, and behavioral outcomes. However, little work has been done to determine if poverty is the cause of these developmental differences, or if other associated factors are responsible.

A team of researchers across six universities, with support from over two dozen partners,1 initiated the Baby’s First Years study in 2018 to study the causal impact of poverty reduction on children via regular, unconditional cash transfers, concentrating on a range of early childhood outcomes including brain activity. The study focuses on the first 4 years of a child’s life, as poverty in early childhood may be especially likely to shape development given the brain’s rapid growth and high adaptability during the first years of life. Researchers note that the adaptation of children’s brains to their experiences in early childhood is a sign of healthy development, and different brain activity patterns are likely to be adaptive and confer different benefits in different contexts.

For the Baby’s First Years study, the research team recruited 1,000 low-income mothers, the majority Black or Hispanic, in postpartum wards across four diverse metropolitan areas: New York, New Orleans, Omaha, and the Twin Cities. Mothers reported earning an average of just over $20,000 in the year before the study. The evaluation will follow these mothers and their children through the first 4 years of their child’s life to collect quantitative and qualitative data, measuring impacts on parent stress, family expenditures, child care arrangements, child development and behavior, and other aspects of family life. 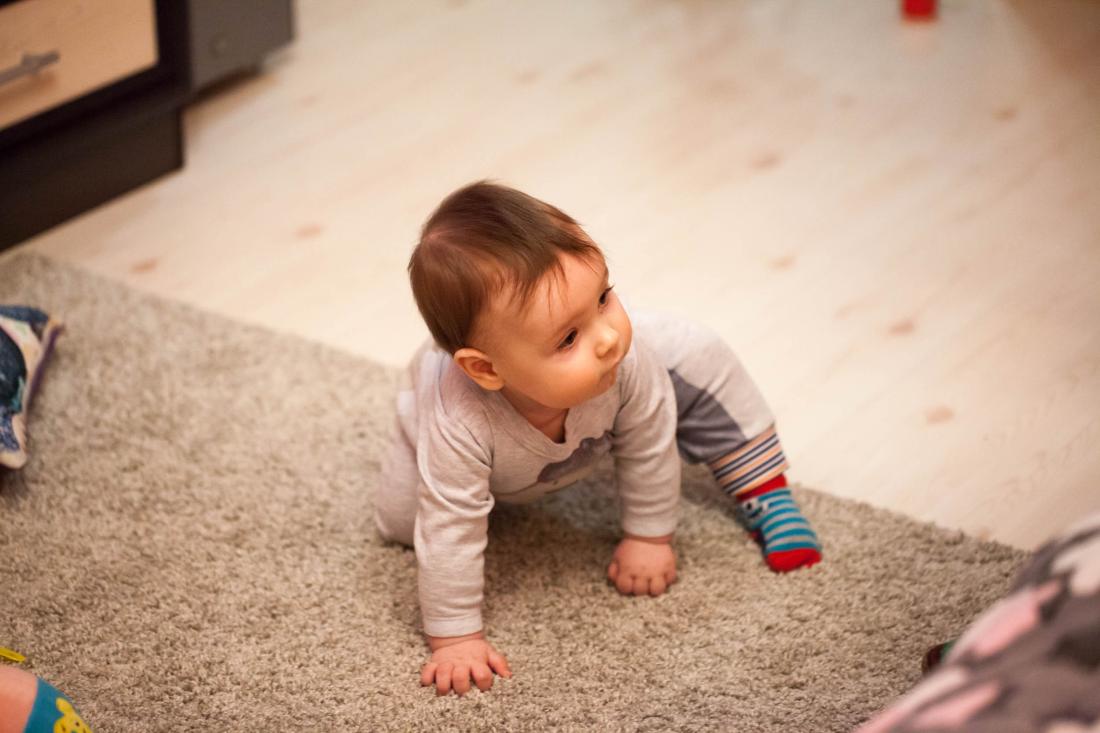 A baby transitions from crawling to standing in the United States.
Photo: Shutterstock.com

In this first paper focusing on the one-year follow-up wave of data collection, researchers evaluated the impact of poverty reduction on child brain activity. Researchers randomly assigned 1,000 mothers to receive either a $333 or $20 unconditional monthly cash payment (a difference of $3,756 a year) for the first four years of their child’s life. The larger payment amounted to a 20 percent boost in annual income on average. The researchers originally planned to include all 1,000 mothers in this follow-up, but due to practical challenges resulting from the pandemic, they only recorded brain activity among the children of 184 mothers in the intervention group and 251 mothers in the comparison group.

Researchers assessed the brain activity of the mothers’ children on their first birthday using resting electroencephalography (EEG), a method which measures brain activity along two dimensions: frequency (low to high-frequency bands) and power (the amount of activity within a frequency band). Research has shown that more power in mid- to high-frequency bands (alpha, beta, and gamma) is correlated with higher language, cognitive, and socio-emotional scores in later childhood, while more power in low-frequency bands (theta) has been associated with learning and behavioral problems. Researchers analyzed both the absolute power of four different bands and their relative power—the percentage share of total brain wave activity that fell into each band—for infants in the study.

The intervention had an impact on children’s brain wave activity. EEG measurements of children in the intervention group showed higher absolute power in each of the three mid- to high-frequency bands measured, though researchers note that the statistical significance of these results fades under some specifications and adjustments. The alpha, beta, and gamma bands saw an increase in absolute power of 0.17, 0.26, and 0.23 standard deviations, respectively, as well as an increase of 0.25 standard deviations when aggregated together in an index. The increases in the beta and gamma bands were significant before, not after, adjustment for multiple comparisons. There was also an increase in absolute power in each of the individual frequencies that compose the alpha, beta, and gamma bands. Impacts were also found in regional analyses in which the researchers measured absolute power across frequency bands within different areas of the brain. In frontal brain regions, beta and gamma power remained significant both before and after adjustment for multiple comparisons.

These results provide the first causal evidence that poverty reduction through monthly unconditional cash transfers can affect early childhood brain development on a relatively brief timescale. The researchers believe the regular payment changed the program children’s experiences and environments, which their brains then adapted to, though further research is necessary to understand how the cash led to changes in the children’s environments, and which changes impacted brain activity patterns. Further research is also needed to understand whether these differences will lead to the differences in cognitive skills that prior research has linked them to.

The results provide policymakers with important evidence as they discuss solutions to early childhood poverty. In 2021, the US federal government passed the American Rescue Plan which expanded the Child Tax Credit (CTC) for a year and provided families with a monthly check of up to $300 per child. The expanded CTC expired at the start of 2021, with lawmakers in early 2022 debating whether to extend the program and, if so, whether to add conditions to the benefit. The Baby’s First Years study provides evidence that unconditional monthly payments to mothers, which bear resemblance to the current CTC, may change the brain activity of infants during their first year of life. Ongoing research on the Baby’s First Years intervention will examine possible mechanisms for these changes and investigate whether cash transfers to mothers impact young children through their fourth birthdays, which may add important evidence to future policy conversation about child-focused poverty reduction policies like the CTC.