Agricultural productivity growth in Sub-Saharan Africa has lagged behind the rest of the world, largely due to low adoption of productivity-enhancing technologies. Farmers may be reluctant to adopt new technologies because they lack credible information about them. Researchers examined how social network-based information dissemination impacted agricultural technology adoption in Malawi. Results suggest that targeting seed farmers using a complex social network model was most effective in increasing adoption, but this approach was also expensive and difficult to implement.

Agricultural productivity growth in Sub-Saharan Africa has lagged behind the rest of the world, largely due to farmers’ low adoption of productivity-enhancing technologies. One reason farmers are reluctant to adopt new technologies may be that they lack credible information about them. If this is true, learning through social relationships could be a key way to disseminate important information. However, little research exists on how information spreads through social networks and how that impacts individuals’ behavior. To address this question, researchers examined how social network-based information dissemination impacted agricultural technology adoption in Malawi.

Malawi is a predominantly rural country where agriculture is a main source of employment and growth. While overall poverty and malnutrition rates have improved in recent years, the country remains impoverished; 47.8 percent of children under five were stunted in 2010.1 Given that more than 60 percent of the population’s calorie consumption derives from maize, technology adoption and productivity improvements in the crop could have significant welfare impacts on the country.

Agricultural training in Malawi is disseminated through an extension system operated by the Ministry of Agriculture and Food Security. Agricultural Extension Development Officers (AEDOs) train two seed farmers of their choosing in villages under their jurisdiction. But because many AEDOs are responsible for thirty villages or more, direct contact with villagers is rare. In a 2007 national census, only 18 percent of farmers reported participating in any type of extension activity. 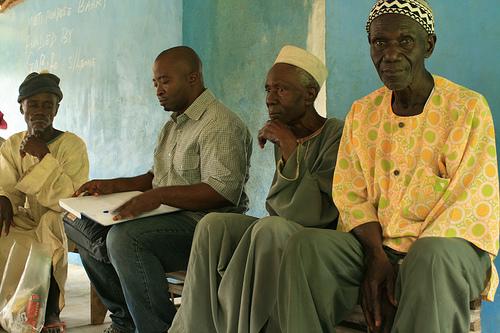 Following up on a similar intervention, Promoting Sustainable Farming Practices in Malawi, researchers examined the impact of targeting information based on social networks on technology adoption. In collaboration with the Malawi Ministry of Agriculture and Food Security, researchers modified the existing extension program to promote two technologies: pit planting, a more productive way to plant maize, and better crop residue management (CRM), which emphasizes retaining residue to improve soil quality.

In total, the program included approximately 5,600 households in 200 villages in three districts: Machinga, Mwanza, and Nkhotakota. In each village, AEDOs trained two chosen seed farmers —well-connected farmers who would subsequently promote the technologies among their communities. To identify potential seed farmers, researchers conducted a census in each village to identify social networks. Researchers then randomly assigned each village to one of the following four variations of the program, in which seed farmers were chosen through different selection methods. All other aspects of the program remained the same.

Over the next three harvest seasons after randomization, researchers collected information from households on farming techniques, input use, yields, and other demographic data. Precipitation data was also collected to account for the impact of weather patterns.

The program convinced seed farmers to adopt pit planting, leading to increased yields for these farmers. While technology adoption by non-seed farmers was low across all groups, the Complex villages exhibited the largest increases in adoption relative to comparison villages. Results from the Geo Treatment group suggested similar but inconclusive increases in adoption.

The program increased the likelihood that seed farmers across all groups adopted the technologies. Compared to shadow seed farmers, or those farmers who would have been chosen as seed farmers under the selection methods used in the other villages, actual seed farmers were 25.1 percentage points more, or more than four times as likely, to adopt pit planting in the first year. Compared to shadow farmers, seed farmers who adopted pit planting experienced a 44.9 percent increase in maize yield. Moreover, differences in yields were largest during low-rainfall conditions, an important resiliency feature of the technology.

Trained seed farmers were also 13 percentage points more likely to use CRM in the first year, but adoption dropped in the second year among both actual and shadow seed farmers. This drop-off indicates that the technology may not have been well suited for these farmers. Thus, only pit planting adoption is discussed below.

The increase in adoption in network-targeted villages was largely driven by farmers who had links to both trained seed farmers, suggesting that the complex social network model was more effective than the simple model. Farmers who had connections to both were 31.7 percent more likely to have heard about pit planting in season one, and 88.6 percent more likely to adopt it in season two, compared to farmers with no connections.

These results demonstrate that selecting seed farmers based on a complex social network model was most effective in increasing pit planting adoption. Further research is needed on other simple and inexpensive procedures that could replicate the results of the successful but data-intensive and expensive social network modeling approach.

1 result(s)
What works for improving welfare in agriculture: version 0.001