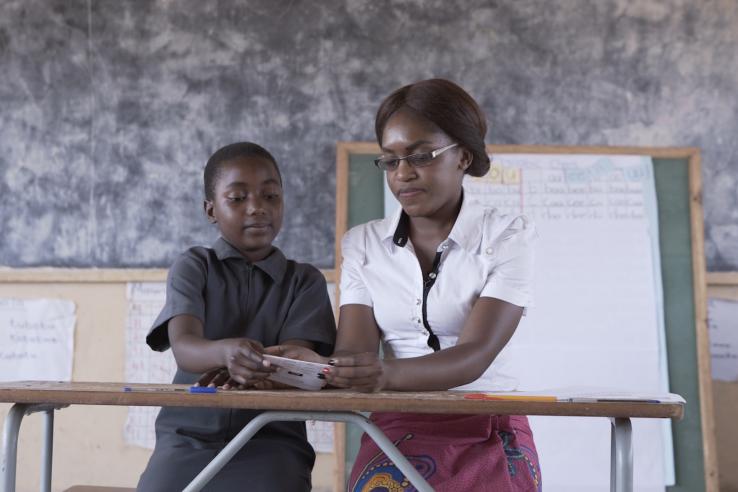 A teacher assesses a student's foundational skills in a Teaching at the Right Level lesson in Pemba, Zambia in 2017.

This post first appeared on the Teaching at the Right Level blog.

It’s late 2016, and I’m standing at the back of a classroom in rural Eastern Province, Zambia, together with my colleague Emily Cupito and Ministry of General Education Principal Education Standards Officer, Mahuba Hazemba. A teacher stands at the front of the class describing a new maths concept, occasionally asking a question to the class. A few children confidently raise their hands to answer, while many others stare down at their desks hoping not to be called on.

A bell rings, indicating that the class is over, and the next lesson is starting. There is an instant change of mood as some children join the class while others leave. Desks are quickly moved out of the way as children enthusiastically find a spot to sit on the floor. The teacher, too, moves away from the chalkboard and towards the centre of the classroom.

As the lesson gets underway, the desk-starers from the previous class now have chalk in hand and are working together to write a set of words on the floor. It’s hard to know exactly what these children are thinking or feeling, but they’ve transformed from the previous class and appear excited by the opportunity to engage and learn.

I was observing a Catch Up class – a foundational skills programme based on the Teaching at the Right Level approach, pioneered by Indian education organisation Pratham and informed by years of iterative rigorous research spearheaded by 2019 Nobel laureates Abhijit Banerjee and Esther Duflo.

Years earlier, Banerjee and Duflo, co-founders of J-PAL, together with Pratham, planted the seed that led to the buzzing classroom filled with engaged and empowered children I witnessed.

Concerned by the large numbers of children in India who were in school but not learning, Pratham, Banerjee and Duflo asked the question: What if we start with what children actually know, instead of what they’re supposed to know, and see if we can make progress from there?

Pratham developed an approach to improve learning in the classroom. First, identifying what children knew through a simple reading and mathematics assessment. Second, grouping children based on their learning level rather than their age or grade. Finally, focusing on building foundational skills for children in middle and upper primary school, through innovative, engaging classroom methodology, to ensure they had the basics before exiting primary school.

Pratham and J-PAL tested the approach through a series of randomized evaluations. For over 20 years, the model was refined in the pursuit of a cost-effective and scalable way of ensuring that all children are equipped with basic maths and reading skills. The fruits of these efforts have been the development of what we now refer to as the Teaching at the Right Level approach.

Several countries in Africa face the same challenges now that Banerjee, Duflo, and their colleagues at Pratham interrogated all those years ago. With support from Co-Impact, Pratham and J-PAL have partnered to form TaRL Africa, a team that supports governments and organisations in more than ten countries working to address the learning crisis in Africa.

The strong research roots of Teaching at the Right Level, combined with Pratham and J-PAL’s efforts to create a nurturing environment in which TaRL interventions can grow, has contributed to a budding Teaching at the Right Level Africa Community of Practice committed to solving the learning crisis, and inspired by the way rigorous research has demonstrated the approach’s ability to improve learning outcomes.

Since 2016, I have been fortunate enough to stand at the back or sit on the floor of several classrooms across Africa, observing and participating in a quiet revolution as children stop staring at their desks and start raising their hands. We look forward to taking this effort forward with our partners to reach millions of students in the coming years.

Learn more about Teaching at the Right Level. 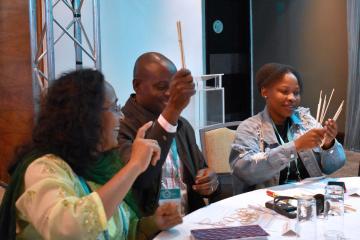