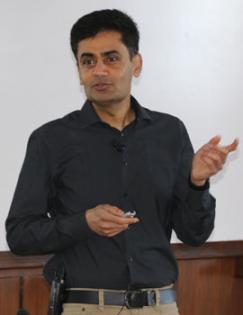 Iqbal Singh Dhaliwal is the Global Executive Director of J-PAL. He works with the Board of Directors to develop the organization’s strategic vision, and with the leadership of the seven regional offices to coordinate J-PAL’s worldwide research, policy outreach, capacity building, and operations. He is also the Co-Scientific Director with Esther Duflo of J-PAL’s South Asia regional office, Co-Chair with Abhijit Banerjee of the Innovation in Government Initiative (IGI), and Co-Chair with Shawn Cole and Lars Vilhuber of the Innovations in Data and Experiments for Action Initiative (IDEA). He is a board member of J-PAL and NGOs Noora Health and Rocket Learning. He has served as a member of a working group of Mission Karmayogi constituted by Government of India to strengthen the capacity of government officials at all levels and 'Group of Experts' convened by the Chief Minister of Punjab, India to develop the post-Covid economic strategy for the state.

Iqbal stood first in the nationwide Civil Services examination and also received the Director's Gold Medal at India's National Academy of Administration. In 2019, the Government of Punjab, India awarded him the Guru Nanak Devji Achievers Award for his "contributions to the field of economics and poverty alleviation." He received the Dean's Fellowship at Princeton University and the gold medal for standing first in the college in his undergraduate program. He has a BA in economics from the University of Delhi, an MA in economics from the Delhi School of Economics, and an MPA in international development from Princeton School of Public and International Affairs.

18 result(s)
J-PAL Global’s community reunites after 18 months of remote work
Learning to live with the pandemic, but not its terrible impact
Four key lessons for building scale-up partnerships
Improving diversity, equity, and inclusion at J-PAL
Growth is not enough
Adapting to a changing world
J-PAL's response to COVID-19
New King Climate Action Initiative will design, test, and scale solutions to combat climate change and poverty
Letter from the Global Executive Director: J-PAL's response to COVID-19
Doubling down to build on an incredible 2019
From evidence to policy: Three lessons for philanthropy from this year’s Nobel Prize
From deworming to DIV: Michael Kremer’s extraordinary success
From research to action: How two Nobel laureates seeded more than just a methodology
Announcing J-PAL’s new Innovations in Data and Experiments for Action (IDEA) Initiative
We now have a Paris Agreement rulebook. Where do we go from here?
2018 in review: A letter from our Executive Director
Moving from evidence to policy change
Announcing J-PAL’s Policy Insights

51 result(s)
Veddis Foundation and J-Pal through ASPIRE Host National Leaders to Boost Governance and State Capacity in India at The/Nudge Forum’s ‘charcha 2022’
J-PAL launches the Egypt Impact Lab to improve lives through evidence-informed policymaking
Growth Is Not Enough
Smart Partnerships
Mission Karmayogi: An ambitious plan to bolster State capacity
MIT to launch research centre at AUC as part of ongoing work to fight poverty in the Middle East
J-PAL and King Philanthropies launch the King Climate Action Initiative to design, test, and scale solutions at the nexus of climate change and poverty
MIT's Abdul Latif Jameel Poverty Action Lab to launch research center at American University in Cairo
Learning from the Lockdown
Poverty Fighters
Opportunities, challenges, and strategies for evidence production and use in the COVID era: 3ie’s expert panel weighs in
Beyond Randomized Controlled Trials
“Prepare to be surprised”
The Next Frontier: Leveraging The Nobel Prize To Shape The Future
Government of Odisha partners with J-PAL South Asia to maximize the impact of anti-poverty programs
Odisha govt partners with J-PAL for evidence-based approach to policy formation
PALs with the Poor
J-PAL Co-Founders Abhijit Banerjee and Esther Duflo Awarded Nobel Memorial Prize in Economics
The Grand Experimenters
Government of Haryana partners with J-PAL South Asia to improve health care through data analytics
Economics As A Force for Good: Iqbal Dhaliwal Delivers Wyner Lecture
J-PAL and Pratham awarded philanthropic funding toward education systems change: New Teaching at the Right Level Africa initiative to support over three million primary school students with evidence-backed approach
Better Governing Through Science
Let evidence drive policy and not assumptions, says Iqbal Dhaliwal
From instincts to evidence: a policymaking journey
The devil is in the details: The successes and limitations of bureaucratic reform
Why don’t economists do cost analysis in their impact evaluations?
Randomized evaluations are focus of first lecture in new series by Aga Khan Foundation Canada and Global Affairs Canada
Civil service: switching over
Video: What if evidence drove policy…and your strategy?
Grant to MIT's Poverty Action Lab increases focus on working with governments
New Government Partnership Initiative expands use of antipoverty policies that work
South Asia struggles to tackle poverty
An Economic Roadmap for India
Ecuadorian President visits MIT
One Size Fits All Doesn't Work
From Evidence to Policy
Video: Frugal innovation: How can we do more with less?
A Global Community Gathers to Celebrate [email protected]
Discussion: How do you know a good charity when you see it?
What to consider when you are considering donating
Lifetime Achievement
Fighting Global Poverty with Hard Numbers
The Second Attempt Made the Difference
3ie Conference: Mind the Gap - From Evidence to Policy Impact
NONIE 2011: Policy Use and Institutionalisation
The 14th Wharton India Economic Forum
U.S.-India People to People Conference
Food Incentives Spur Child Immunization
Newest in the Story of Developmental Economics
Putting Poverty and Hunger Solutions to the Test