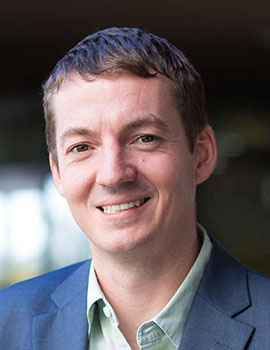 Michael Callen is an Assistant Professor of Economics and Strategic Management at the Rady School of Management, University of California, San Diego. His recent work uses experiments to identify ways to address accountability and service delivery failures in the public sector, working primarily in Afghanistan and in Pakistan. His primary interests are political economy, development economics, and experimental economics.

Callen holds a Ph.D. from the University of California, San Diego.

I am extremely excited about the potential for this project to assist the Afghan government in a core function—paying its employees—and also, in creating a foundation for greater financial inclusion.

I spent my junior year of high school in China in 1999-2000. Hearing the personal stories of transformation that accompanied China's economic development from 1978 to 2000 created a strong personal desire to understand how reform leads to growth and development. I lived with a host family and hearing them contrast their current lives in Beijing, which were full of opportunity, with the hardships they experienced in the 1960s and 70s left a very deep impression on me.

I am working on a project that will change how public sector salaries are paid in Afghanistan. The international community views providing salary support for the foreseeable future as part of its commitment to creating stability in Afghanistan. We hope to improve the salary payment process by transitioning from cash to an electronic system of Mobile Salary Payments (MSPs).

The project is fully implemented in the Ministry of Labor (comprised of about 4,000 employees in Kabul), and will be scaled to the Ministry of Education (MoE) in the coming year. Now, approximately 50 percent of employees in the MoE are paid directly with cash and the rest via banks, which are often distant and cumbersome to access. In addition, nearly 60,000 of approximately 260,000 teaching positions in Afghanistan are filled by contractors with no formal status as state employees. All of these contractors are paid in cash.

The cash payment system is problematic because it creates opportunities for corruption and inefficiencies—for example, it’s difficult to track where the cash ends up. One objective of the MSP initiative is to verify the existence of all the employees on the payroll as part of an effort to enroll them in mobile money accounts. In addition, it is nearly impossible to audit payments made in cash, creating additional scope for leakage. Mobile money transaction records, by contrast, are much more easily audited.

Lastly, even if salaries do not go missing, they are paid irregularly and require substantial travel to obtain. The MoE disburses about 410.2 million USD (28,301.1 million AFA) in salaries annually. Updating Afghanistan’s payment system to MSPs could recover substantial resources, increase teacher retention and morale, and provide teachers a means of financial access. Another exciting feature is that MSPs are potentially highly scalable to other governments in countries with limited formal financial institutions. This project has received approval from Afghanistan’s High Economic Council and will start to roll out this fall.

I am extremely excited about the potential for this project to assist the Afghan government in a core function—paying its employees—and also in creating a foundation for a digital payment system that might promote greater financial inclusion.

The project I just described comes pretty close. I am constantly impressed by the resilience and commitment of the many stakeholders in government and the international development community who are taking it forward, despite a range of formidable and constantly evolving obstacles. It certainly involves much more work, with much less of a guaranteed return for research, than any project I have ever worked on. I'm unwilling to call it a dream evaluation, however, until the initiative is implemented and we investigate whether and how it might strengthen governance and promote financial inclusion.

During the 2010 Wolesi Jirga (lower house of parliament) elections in Afghanistan, my coauthor James Long (University of Washington) and I spent the day traveling to polling centers in Kabul to see the electoral process in person. Despite some skepticism about whether the process would be fair—issues during the presidential election the year prior were still fresh in many people's minds; some explosions had happened in the early morning, and some polling centers were under threat—there was a palpable excitement in the air around the democratic process. I found the voters’ enthusiasm deeply touching. It created a sense that it’s possible, though admittedly extremely challenging, for healthy institutions to take root even in an extremely fragile context.