Back to table of contents

Although quality control checks in the field should catch most errors in data collection, there are a number of steps you will have to undertake to prepare your collected data for analysis. This resource outlines the key steps involved in data processing and cleaning. We first describe best practices in file and code organization, which will help others (and yourself) easily find the most recent versions of files and understand what was done with the data. The second half of the resource details steps to make the data ready for use. This resource focuses on cleaning data with Stata code, but similar principles apply to R and other data analysis tools.

Setting up a clear folder structure early on in a study will enable consistent management of data, documents, and other files. Researchers typically will negotiate a data flow with study partners—and in tandem can begin creating a plan for storing and managing data and other files. Files are commonly organized by type: do-files, raw data, cleaned data, and survey instruments. In planning file structure, you should at a minimum do the following:

An example of good file structure is as follows:

Here, the author used numbers to sort the five top folders, with some room to add more folders.

Code should be organized to help the reader understand what was done, which is useful both in continuing analysis and in writing up methods for a paper. Code files can get long, and well-documented code saves the user time by limiting repetitive work, errors, missed steps, and unnecessary re-testing. There are several practices you can incorporate to make your code easy to understand.

Start with a well-organized, informative header. The header of your do-file should contain the following:

You should then set the environment:

In Stata, you can set up a relative reference by either defining a global or changing the working directory:

Note: Option 1 (using globals to set file paths) from the above example may be more robust to differences in coding styles between authors.

At the end of your do-file, the command capture log close will close and save your log file. Again, using the command capture means that Stata will continue through, even if there is an error in the command (e.g., there is no open log) and will suppress output from that command. exit will stop the do-file from running, and exit, clear will let you exit, even if the current dataset has not been saved.

To keep do-files from getting too unwieldy, organize code into sections, each with a comment header (see below). You should also clearly label each discrete task, such as renaming variables or running different regressions. Comments should focus on how and why you have made certain decisions.

There are two common approaches to commenting while coding:

In both approaches, it is useful to create comment markers at important events or certain types of decisions, such as creating or exporting a table, graph, or chart; merging and appending datasets; reshaping and collapsing; dropping duplicates; and changing a unique ID. If you use the same marker for the same type of event (e.g., generating a new variable, top-coding a variable, replacing values, etc.), you can later easily search the do-file for that term. Examples of comment markers are /!\ and decision. Define the markers used in the first section of the do-file, after the header.

In Stata, there are 4 important ways of breaking up code and adding comments:

Pseudocode is an outline of the algorithm you plan to use written out in a mixture of plain English and code. It allows you to think about high-level design and the pros and cons of various approaches to what you want to do before looking up specific programming details. In a long program, is easier to change a couple of lines of pseudocode than real code (which can require significant debugging), so it is worth putting in some time on pseudocode upfront. For more information, see Pseudocode 101 from MITx's Introduction to Computer Science and Programming Using Python course.

Pseudocode is also useful for documentation; rather than adding comments to code after it is written, which can lead to conflicts if the code is updated and is no longer consistent with the comment, the thought process is already documented in the pseudocode. Note that when using loops (as in below example) you can use the command set trace on to determine which lines of code work.

You could write the following:

Once you know what you want the algorithm to do, you can fill in the pseudocode with real code:

A master do-file is one that calls all of the different steps of the analysis in order and runs them in one go. It’s useful to include when you want to run everything, such as if others want to check the replicability of your code or want to check results before submitting the paper. It can be time-consuming to run through everything, however, so it is useful to write code so that the individual files also run by themselves. Within the master do-file, call each program using the command do (do-file name).

Documentation and version control are critical components of any project. Documentation tracks your thought process, letting others (including your future self) understand why certain decisions were made. This both helps others understand your results and improves the replicability of your work--and, thus, the integrity of your research. During data cleaning and analysis, it is easiest to document mechanical coding decisions directly in the code using pseudocode or clear comments. Bigger decisions such as the imputation of variables or dropping outliers should also be documented in a separate file and later included in the paper. Task management systems (such as Asana, Wrike, Flow, Trello, and Slack) can document tasks, decisions, and other work that occurs outside of coding. This information can later be written up in a readme file, the related paper, or in other documentation.

Version control lets you preserve earlier versions of files, meaning that no change is irreversible (an example of an irreversible change is when you save a change and then close the file, you can’t easily undo the change). This is especially important when multiple revisions are made to a file--which will be the case during data cleaning. Your two most common choices for version control are doing so manually or using Git and Github. Dropbox offers limited version control capabilities but only stores previous file versions for a finite amount of time.

For manual version control, as written above, archiving and dating the entire do-file folder together preserves the structure that worked together. Keep the current version of each file in your working directory and date each version using the format YYYY_MM_DD or YYYYMMDD - this lets you sort files by date. Do not append file names with initials, as this quickly gets confusing. That is, use file names such as cleaningcode_20190125, rather than cleaningcode1_SK.

An alternative is to use Git and GitHub, or SVN. Git has a bit of a learning curve but has distinct advantages over manual version control. For example, multiple users can work on the same file at once and ultimately sync the changes, and the changes themselves are documented, so it’s easy to see which change was made from one version to the next. This makes Git particularly useful for projects involving many people collaborating on the same files. Useful resources for getting started with Git include the Udacity Git/GitHub course, and GitHub help. J-PAL staff and affiliates: see also J-PAL's Research Staff Training presentation on the subject.

Regardless of your choice of manual version control versus using Git/Github/SVN, for data cleaning, the two most important points to always remember are:

Data cleaning is an important precursor to doing any analysis. Even with careful surveying, there may be typos or other errors made in data collection, or there may be outliers that, if not properly accounted for, could skew your results. Before doing any kind of analysis, it is important to first clean the data, regardless of whether it is original field data or administrative data. Cleaning data can be time-consuming, but putting in the effort upfront can save a lot of time and energy down the line. Note: the first step in data processing should always be to encrypt data that contains information that could be used to identify individuals.

Throughout the data cleaning process, the two most important points to keep in mind are:

By documenting all data cleaning tasks and preserving the original data file, any mistakes can be undone, and the steps taken to clean the data can be recreated. This is especially important for research transparency and robustness checks. For example, researchers can test the stability of results based on different cleaning/trimming criteria (e.g., winsorizing or dropping observations above the 95th vs. 99th percentile of the distribution).  Data cleaning should be done on de-identified data (as identified data will not be used in analysis anyway). For more information on encrypting identified data, see Data security procedures for researchers. J-PAL staff and affiliates: see also J-PAL's RST lecture on data security. For more information on de-identifying data, see the de-identification resource.

1. Set up your file
Follow the steps above: set up a header that clears the environment, sets the working directory, seed, and version, and includes information on project name, co-authors, purpose of the do-file, date of creation, etc.

2. Import and merge your data

Unless an observation is an obvious error (and it is obvious what the value was meant to be), do not try to guess what it should be.

When programming your survey, limit use of strings as much as possible (for example, use codes and value labels for districts, rather than a string variable with the district written out). This will save enumerators time and reduce the number of errors made in data entry (e.g., by mistyping the word “male” as “mael”). The string functions section of the Stata manual has a number of useful commands, and IFPRI has a helpful guide that covers string manipulation. Some particularly useful Stata commands to help clean string variables include: 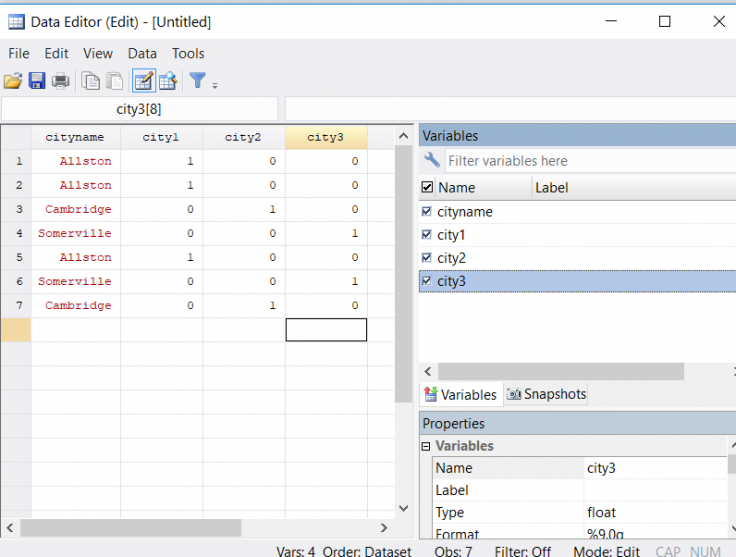 “Others” in categorical variables

Even with extensive questionnaire piloting, you will have instances where the options included in a categorical variable are not exhaustive, and respondents choose “other” (where a new string variable for the “other” responses for that particular variable is then created). For example, a household roster that includes the relationship to the household head may not include great grandparents, who then appear in the survey, or respondents may report maize sales in non-standard units that you did not include (e.g., 5 liter buckets). In these cases, you should:

Document any judgment calls you make extensively, and keep them reversible - possibly create a new variable. For example, HH_income_annual vs. HH_income_annual_corrected. 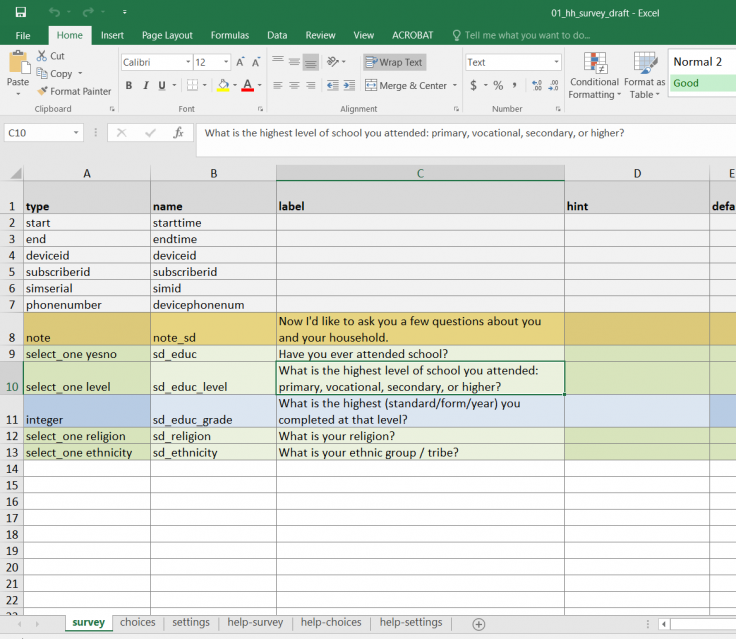 The "survey" sheet of a SurveyCTO xlsx form 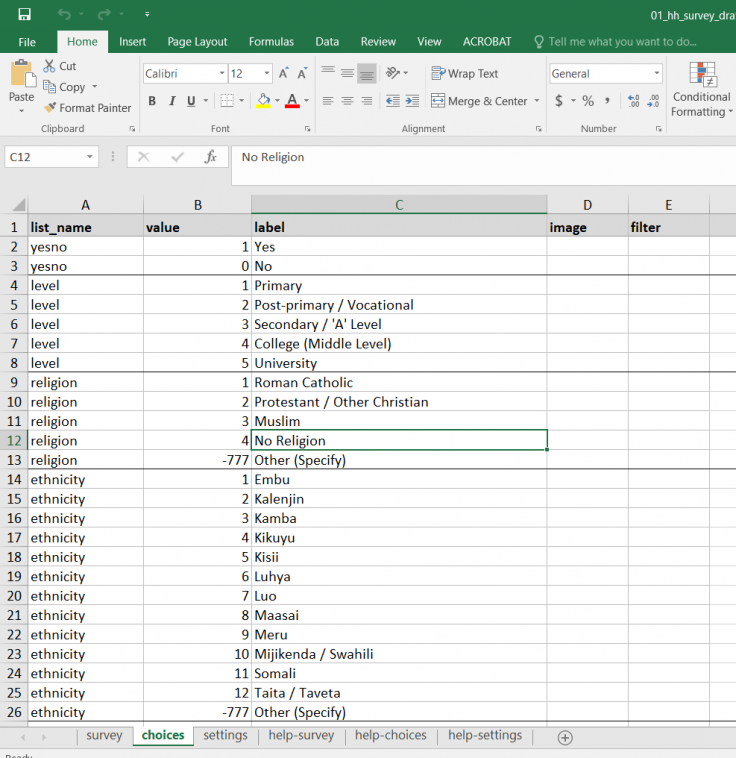 The "choices" sheet of a SurveyCTO xlsx form

These resources are a collaborative effort. If you notice a bug or have a suggestion for additional content, please fill out this form.