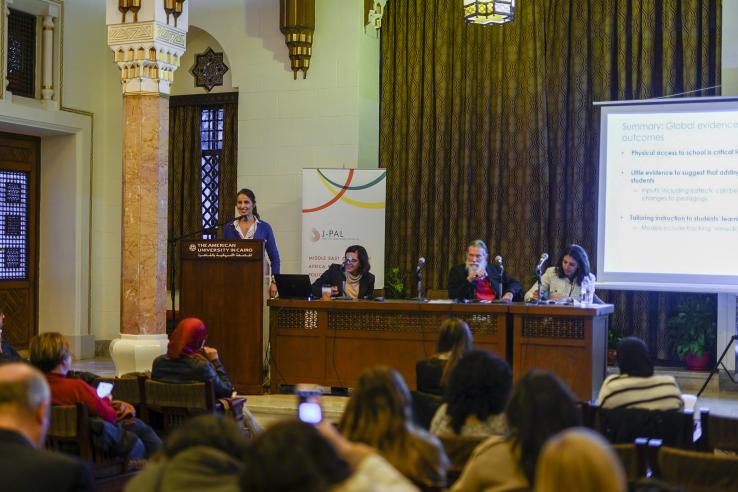 Egypt is in the early stages of overhauling its education system (known as Education 2.0) as part of its national sustainable development agenda (known as Egypt’s Vision 2030). Education 2.0 includes a number of policy changes, including changing curricula to ensure that educational content is up to date and relevant, adjusting teaching methods to enable the adoption of more learner-centered approaches, and building the capacities of students by teaching them how to think critically, negotiate, and problem solve, among other priorities.

In alignment with these recent efforts, on Sunday, February 23, 2020, the J-PAL Middle East and North Africa (MENA) Initiative, housed within the American University in Cairo (AUC) School of Business, hosted a seminar on “Strengthening the Egyptian Education System to Better Reach Marginalized Children and Youth: What We Can Learn from Randomized Evaluations” at AUC. The event took place as part of the broader Global Evidence for Egypt Spotlight Seminar Series, which brings together Egyptian policymakers and leading J-PAL affiliated researchers to discuss pertinent policy issues in Egypt.

The recent seminar on education featured one of the co-authors of this blog, Sule Alan, Professor of Economics at the European University Institute and J-PAL affiliated professor, alongside Ray Langsten, Research Associate Professor at AUC, and Yasmin Helal, Founder and Executive Director of the Educate Me Foundation.

Alan opened the panel by sharing key lessons emerging from J-PAL’s global evidence in education. Langsten followed up by highlighting key educational challenges prevalent in the Egyptian context. Helal discussed how Educate Me’s work within local communities responds to these issues and can continue drawing from the rigorous global evidence to strengthen its programming efforts.

The panelists and audience members, consisting of national policymakers, intergovernmental officials, education practitioners, and development researchers, engaged in a conversation covering a number of themes relevant for strengthening the Egyption education system.

In Egypt, school access can be limited in certain regions and among specific populations. For example, in Egypt’s rural areas, such as Upper Egypt, families live in small, rural hamlets which are generally located far from central village primary schools. Parents, as a result, are often reluctant to allow their daughters to walk long distances to attend local village schools.

Two studies in Afghanistan and Pakistan demonstrated improvements in enrollment, attendance, and learning by reducing travel time by creating local schools using existing resources. The studies suggested that creating schools, when the alternative is no school at all, may be particularly beneficial in underserved areas or areas with security concerns.

In the case of Afghanistan, during the time of the evaluation in 2007, distances between villages were great and traveling between them dangerous—especially for young children and girls. As such, Burde and Linden (2013) evaluated a five-year USAID-funded program that created schools directly in children’s villages. Communities provided space for the schools, while USAID provided the educational materials and teacher trainings.

As a result of the program, overall formal school enrollment increased and test scores improved among both boys and girls. Researchers found that distance played a large role on student outcomes, with school enrollment rates falling by 16 percentage points and test scores dropping by 0.19 standard deviations for each additional mile a child had to otherwise walk to school.

Reducing teaching to the test to better educate Egyptian students

The Egyptian education system has traditionally prioritized passive learning and rote memorization over active learning, critical thinking, and creative expression among students. This largely results from the education system’s heavy emphasis on end-of-session examinations as a means for continued education, which, in turn, drives educators to often teach to the test rather than focus on overall learning outcomes. As a result, students are often taught at the standardized grade level and may in the process miss out on learning valuable practical skills.

One particularly effective and cost-effective pedagogy, evaluated through thirteen studies in Chile, India, Kenya, and the United States, tailors instruction to students’ learning levels and has led to increased student learning outcomes. This is especially beneficial in classroom settings where there can be large variations in learning levels within grades, and in which teachers are often incentivized to teach grade-level curriculum to the top of the class without having flexibility to support students who may be falling behind. This form of tailored instruction can be delivered effectively through multiple channels: during or after school; by tutors, volunteers, or government teachers; or through education technology.

There is emerging evidence on the importance of developing students’ non-cognitive skills to improve learning outcomes. For instance, Alan has been working with public elementary schools in Istanbul to evaluate the impact of an innovative educational intervention aiming at improving learning outcomes by fostering students’ grit and patience. This research program was motivated by studies that document that non-cognitive skills, such as patience, self-control, and grit, affect educational as well as other socio-economically significant outcomes, such as criminal activity and health. The research program involved first developing scientifically informed toolkits for teachers, and then offering extensive training on how to use the toolkit and how to nurture these skills in the classroom.

Alan has found that as a result of the program, students exhibit higher patience, higher resilience to negative feedback, greater willingness to engage in challenging tasks, and more openness to skill-building productive activities. These enhanced skills naturally led to substantial increases in students’ math and verbal test scores.

The recent spotlight seminar on education is an example of how global evidence can speak to critical policy issues in countries around the world. Researchers shared a global research perspective and offered evidence-informed recommendations for tackling challenges in the Egyptian education system. Local leaders helped ground the evidence in the Egyptian context while exploring possible policy solutions.