Last updated:
Evidence from randomized evaluations in low- and middle-income countries shows that giving small loans in the form of microcredit did not lead to transformative impacts on income or long-term consumption on average, but it did help households better manage financial choices. 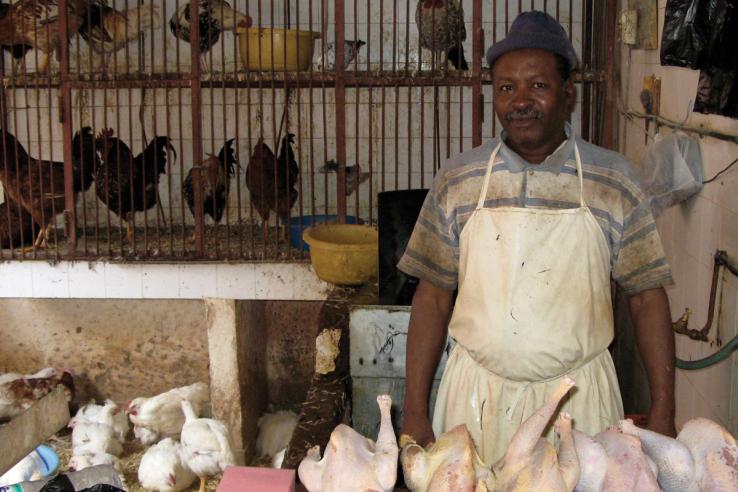 Many policymakers are interested in entrepreneurship as a potential pathway out of poverty, and several recent studies show that small-scale entrepreneurs have access to high-return investments [1][2][3]. Yet, low-income households have historically had limited access to financial services such as credit, savings, and insurance products that could lead to increased investments [4].* Microcredit was designed to overcome credit market failures and help low-income borrowers take advantage of investment opportunities. It expanded access to credit around the world, typically in the form of small business loans with relatively high interest rates and immediate, biweekly loan repayments. As of 2013, 211 million people around the world had ever borrowed from a microcredit institution, of whom 114 million were living in extreme poverty [4]. 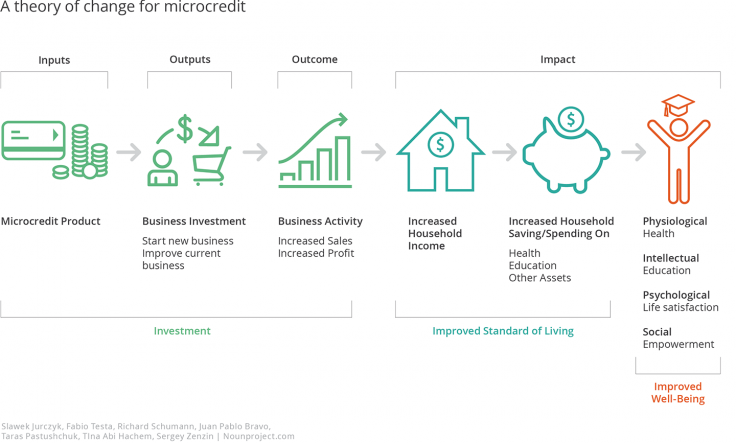 A review of seven randomized evaluations in low- and middle-income countries found that the traditional microcredit model did not facilitate high-return investments among the poor or lead to transformative results on average for income or long-term consumption.

Demand for microcredit was more modest than many of its advocates had claimed, investments in most cases did not lead to increased profits, and there were no increases in average household incomes. However, microcredit did not lead to widespread harmful effects, and it did help households better manage financial choices [5][6][7][8][9][10][11][12][19]. Donors with the goal of supporting poverty reduction should not finance or subsidize traditional microcredit lending, but should instead support innovations in targeting, product design, and consumer protection.

There are several potential explanations for the limited impact of traditional microcredit on income and long-term consumption, which this policy insight and subsequent ones will examine in turn.

First, not all borrowers may have access to or want to take high-return investment opportunities. Indeed, loans targeted to specific borrowers—high-potential entrepreneurs—show some promise for increasing incomes.

Furthermore, many borrowers use loans for consumption rather than investments, suggesting that there are other, non-entrepreneurial returns to these products.

Microloans also tend to be costly to deliver and expensive for low-income borrowers, though product and market innovations can make it easier for banks to lend at lower costs.

In addition, loans may not be structured in ways that facilitate making high-return investments. In these cases, product design modifications to better meet borrowers’ cash flow needs may help, such as changes to loan repayment timing or frequency.

Finally, risk management issues may limit the impact of microcredit.

Demand for traditional microcredit products was modest when offered to a general population. In four studies where microcredit institutions offered microloans to a general population, take-up ranged from 13 to 31 percent [6][7][10][11]. This was much lower than the partner microcredit institutions had originally forecasted. Demand was higher among borrowers who had already expressed interest in or applied for a loan, ranging from 40 to 100 percent [8][9][19]. These results suggest that traditional microcredit may be perceived as a useful product by some, but not all, potential borrowers [5][6][12]. 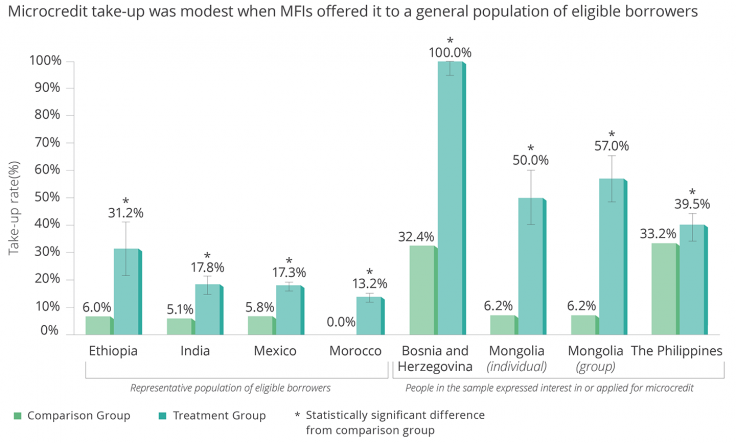 Yet, these activities only led to higher business profits on average in Morocco, where profits increased by 22 percent on average, driven by profit increases among larger businesses and among borrowers that had previously farmed and owned livestock [6]. In India, average business profits were more than twice as high as businesses in the comparison group, and these increases were concentrated among the most profitable businesses that had existed before expanded access to microcredit [10].

Microcredit access did not have widespread harmful effects and did give households more freedom in their financial decisions. Yet, it did not increase income, women’s empowerment, or investment in children’s schooling. Across all seven studies, researchers did not find negative impacts on stress, job satisfaction, business operations, or income levels [12]. Six of the seven studies documented ways in which microcredit helped borrowers better control their financial lives [6][7][8][@][10][19].

For example, business owners in Morocco increased business profits, but they also reduced wage labor income by 6.7 percent, potentially because it was a less stable income source [6]. In Mexico, women with access to microcredit were 1 percentage point less likely to sell their assets to pay off debts (a 20 percent reduction) [7]. In the Philippines, microcredit helped borrowers better cope with risk and strengthen community ties [8].

Yet, none of the seven studies found significant impacts on borrowers’ household income on average [12]. In three of the four studies that evaluated women’s empowerment, microcredit access had no effect [6][7][10][11]. In Mexico, where Compartamos emphasized empowerment as part of its product, women did enjoy a small increase in decision-making power [7]. In addition, the six studies that measured children’s schooling also found no effect [6][7][9][10][11][19][12].

Targeting high-potential individuals may increase microcredit’s impact. While traditional microcredit has limited impacts on average, some borrowers earned high returns from investing in their businesses [12]. As outlined above, this was the case for preexisting, larger, or more profitable businesses in India and Morocco [6][10][12]. A follow-up analysis of the seven microcredit evaluations found that households that operated businesses before microcredit was offered expanded their businesses and increased total consumption as a result of having access to microcredit [13].

People may be able to identify entrepreneurial capacity in themselves or others in their community, and providers could leverage this information to better target prospective clients. Evidence from Mali suggests that high-potential borrowers self-selected into the credit market (for loans designed for farming). Grants had no impact on profits when given to farmers who had chosen not to apply for agricultural loans, yet farmers who applied for the loans were more productive and had higher returns to capital [14]. A study in India found that community members were able to predict which entrepreneurs would have high returns to capital from a cash grant. The community was better able to identify top entrepreneurs than analysis of observable data alone [15].

Microcredit’s potential to alleviate poverty may be greater when credit is better allocated to customers for whom it would indeed be transformative.

More flexible lending products may also lead to higher-return entrepreneurial investments. In a randomized evaluation in West Bengal, India, researchers found that giving clients a two-month grace period before beginning repayment raised the default rate from 2 percent to 9 percent, but allowed them to invest more in their businesses, resulting in higher profits and nearly 20 percent higher income after three years [20].

They also found that switching from weekly to monthly repayments did not affect the repayment rate and reduced clients' financial stress [21]. For clients who are farmers, tailoring products to agricultural contexts can improve the take-up and impact of credit (see this Policy Insight).

It can be challenging to know exactly how borrowers use loans, with implications for MFIs and researchers. Since many studies tend to measure outcomes after one year, it can be difficult to capture exactly what borrowers spend their loans on. For instance, if investments are higher one year after loan disbursement, we can infer—but cannot be certain—that the initial loan was used to increase investment. To better understand how borrowers use microloans, MFIs and researchers should collect spending data very shortly after loan disbursement.

To illustrate the difference between self-reported loan use and short-term spending data, a study in the Philippines analyzed several different ways of measuring how loans were spent two weeks and two months after loans were disbursed and found that they were used for business investments. When asked directly about how they spent their loans, people were more likely to report using loans for household consumption and to pay off debts when they were not reporting to a bank. However, when comparing these self-reports to an analysis of household and business expenditures, researchers found that borrowers spent more on investments than they had reported, indicating that self-reported data may not always accurately capture the use of funds [16].

Some borrowers use microloans for consumption and/or risk mitigation rather than investment, suggesting that there are high non-entrepreneurial returns to credit. Despite their limitations, self-reported data are often all we have to understand how borrowers use loans.

Four of the seven microcredit studies included self-reported data which indicate that some people borrowed for non-business expenses [6][@][10][11][12].

Others used it to repay other loans (30 percent in India) or pay for schooling, ceremonies, or general consumption (9 percent in Ethiopia) [10][11].

The risk low-income households face can limit the returns to business investment [17].

Furthermore, some borrowers use loans to mitigate risk. For example, in the Philippines, access to microcredit led to a 3.5 percentage point reduction in holding health insurance and 7.9 percentage point reduction in holding other types of insurance, suggesting microcredit was used to buffer fluctuations in income or expenses [8]. An evaluation in South Africa found that consumption loans for marginally creditworthy individuals helped borrowers keep their jobs by absorbing shocks that would have prevented them from getting to work [18].

Taken together, these results suggest that borrowers may have high personal returns to using loans for non-business consumption or risk-mitigation purposes, though this may have limited or no impacts on poverty alleviation. Borrowers pay a premium in the form of high interest rates to use loans for these purposes; reducing costs for providers and borrowers would make this a more affordable way for borrowers to finance non-business expenditures (see Reducing the cost of lending to low-income borrowers).

*Even in 2014, only 9 percent of adults in developing countries reported borrowing from a financial institution in the previous year, compared to 18 percent of adults in OECD countries. Meanwhile, more than half of households in the poorest 40 percent globally don’t have bank accounts to build savings.