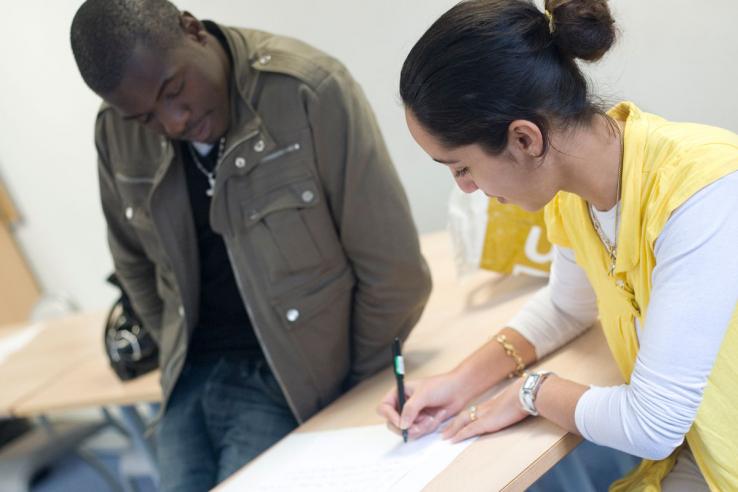 In 2019, before the COVID-19 pandemic, global youth unemployment was 15.3 percent [35]. Young people and women were hit especially hard by the pandemic’s labor market repercussions, with young workers and women experiencing greater employment losses [24].

Job seekers face numerous barriers to finding quality employment. Commonly cited issues include that searching requires substantial effort, job seekers do not know where or how to search for jobs efficiently, and it is difficult to communicate one’s skills to employers [8]. These barriers are greater for youth who often have less work history and job search experience and for women, whose qualifications employers often underestimate.

A review of 30 randomized evaluations of job search assistance programs and other innovations to reduce search barriers shows they helped people look for work more intensively and efficiently. Helping job seekers communicate their abilities often benefited both job seekers and employers. Programs were sometimes ineffective when they targeted the wrong populations or when there were other prominent barriers. Many programs helped only women or helped women more than men, highlighting the specific labor market barriers that women face. Though measured in limited cases, some of the gains from programs to reduce search barriers came at the expense of job seekers who did not participate. While many studies showed positive impacts on outcomes such as interview offers, job offers, employment, and quality employment [3] [4] [15] [23],1 not all of the studies measured or showed sustained benefits to earnings, total employment, or well-being [29].

Job search assistance programs have been generally successful at improving job seekers’ employment outcomes in high-income countries. One early review of job search assistance programs in the United States found that a variety of programs decreased the time it took for participants to find a job [30]. Many evaluations from other high-income countries have confirmed those findings [27] [14] [23] [20] [16]. Yet, who the program targets and who implements the program—government, NGO, or private firm—can influence the program’s impact [32] [20] [14]. For example, two studies from Europe show how payment structures for private job search assistance providers were misaligned with the intended employment outcomes. An evaluation in France that compared publicly and privately provided search counseling found that both programs increased employment but the private program was less effective [14]. The authors suggest that the private program was less effective in part because its payment structure incentivized private providers to maximize the number of participants rather than focus on placing participants. In Switzerland, adding private employment services to standard public services led to better employment outcomes in the short term but worse employment outcomes in the longer term because the private program placed people into lower quality jobs than they would have sought [20]. The payment structure for private providers motivated them to prioritize placement speed over quality.

Where information about job opportunities was costly to acquire, reducing information barriers helped people form more accurate expectations about their job prospects and often had positive job outcomes. In a rural part of the Philippines, giving people vouchers to attend a job fair that gave information on job opportunities in the city increased both the likelihood that someone would look for work in the city and their chances of formal sector employment [12]. In India, giving villages information about city-based business process outsourcing jobs for women, and offering placement services, increased the likelihood that young women worked outside of the home for pay [26]. In Kenya, rural households underestimated how much jobs paid in the city [11]. When rural households received accurate information on earnings, employment options, and cost of living in urban areas, they sent more migrants, on average, to Nairobi over a two-year period [11]. Households that received this information reported higher income, and the heads of those households reported improved financial and mental health [11]. In South Africa, integrating a training on how to use LinkedIn into a job search assistance program had substantial impacts on employment in part because it helped job seekers gain useful information about employers [34].

Transport subsidies and other financial support often helped job seekers find work by alleviating geographic and financial constraints to their job search, although the gains were not permanent when measured. Job searching is often expensive. Costs, such as transportation fees, can prevent people from learning about and pursuing available jobs [2] [23] [9] [17]. However, transport subsidies usually help someone find a job just once, which may explain why the impacts have been short-lived when measured. In Ethiopia, two evaluations showed that transport subsidies helped youth find better quality work but did not increase overall employment; the effects either fully or partially faded over time [2] [23]. In South Africa, a transport subsidy that helped youth explore job options in the city center changed their sense of their job prospects and led them to revise down their wage expectations and accept jobs closer to home. This suggests that short-term transport subsidies should be provided alongside interventions that guide job seekers’ expectations and improve targeting in the labor market [9]. In Jordan, Syrian refugee job seekers did not have enough available cash to search for a job [18]. Providing cash transfers to these job seekers increased their job search effort, earnings, and employment.

Some job seekers underestimate the benefits of job searching. Helping them invest more in their search and identify where and how to look improved employment outcomes. Job seekers often procrastinate and underinvest in their job search [8] [22]. Motivating job seekers to increase and improve their search effort can help [7]. Linking job search activities to unemployment insurance for adults increased the number of employers that job seekers contacted and the time they spent searching for jobs in the United States [22] and increased employment rates in Denmark [28]. Encouraging youth to create an action plan for their job search in South Africa as part of a basic career counseling workshop increased job offers by 30 percent and employment by 26 percent [4]. These action plans helped youth engage in more effective and efficient job searches, including by unpacking complex, difficult tasks into smaller and more achievable ones [4]. In France, young people assigned to “job search clubs” with their peers rather than one-on-one job search sessions with caseworkers were more likely to get a long-term job [33]. This was especially true for job seekers whose group members were, on average, less likely to find a job [33]. Being surrounded by people with worse job prospects, on average, increased search efforts, likely by raising job seekers’ confidence [33]. Job seekers also tend to search too narrowly [3] [15]. An online job platform in Scotland that showed nearby job openings in alternative careers broadened the types of jobs that job seekers considered and increased the number of interviews they were offered [15].

Helping job seekers better understand and communicate their skills to potential employers can improve job outcomes and help firms hire more qualified candidates. Especially in contexts where education quality varies, employers often struggle to determine who is a good candidate. A range of interventions that helped job seekers certify and signal their skills had positive employment impacts, including increasing earnings, employment, and job quality [2] [31] [10] [19]. In South Africa, encouraging youth to include a reference letter with their job applications and providing them with a simple template letter increased employer callbacks by 60 percent (a 2.5 percentage point increase) [5]. Reference letters provided employers with more accurate information about workers’ skills and enabled them to hire higher-ability candidates. In Uganda, while both vocational training and firm-specific training increased employment rates and earnings for young job seekers in the short term, youth who completed vocational training had higher labor mobility and better long-term employment outcomes relative to their peers who received firm-specific training [6]. Researchers suggest this is in part because the vocational training provided more certifiable skills.

Providing job seekers with information about their own abilities sometimes made them more selective. In two studies, one of a global online job platform [31] and one among young workers in Uganda [10], providing higher-performing workers with ratings of their skills increased the wages that they requested or expected for future jobs. This increase in expected wages could prevent job seekers from receiving or accepting certain offers, which could offset the benefits of having clearer signals of their abilities.

Programs that aim to help young job seekers may not be effective if there are other prominent barriers. Increasing the frequency of counseling meetings for youth in Denmark reduced their likelihood of being employed [27]. In the Philippines, providing information about job opportunities abroad, even when combined with additional help applying for work and obtaining a passport, did not increase international job migration, likely because restrictive immigration policies limited job opportunities abroad [13]. A program in Jordan that matched college graduates to employers led to very few successful matches, largely because youth were unwilling to take the jobs that were available [24]. More research is needed to test programs that try to match firms and job seekers in low- and middle-income countries.

Programs that had larger effects for women reflect the heightened barriers that women face in the labor market and their willingness to adopt new strategies to help their search. Five evaluations specifically call out greater impacts for women than men [26] [5] [16] [1] [33]. In South Africa, reference letters increased employment for women but not for men [5]. The results suggest employers were less confident in women’s abilities and that women used reference letters to correct some of those inaccurate beliefs. Similarly, in Australia, augmenting standard job search assistance with access to a template resume and a template cover letter along with guidance on how to fill them in helped women find work more than it helped men [16]. Researchers attributed these differential effects in part to women’s greater receptiveness to training materials.

More research should study whether program participants get jobs at the expense of nonparticipants. A study in France that provided counseling and placement services found that job seekers in the program area who did not receive the program had worse outcomes, indicating that program participants may have benefited at the expense of their peers [21]. Where job openings were scarce, the program may have merely reshuffled who got the limited number of available jobs rather than making firms hire more people. Especially as policymakers consider scaling interventions that help with job searches, it would be valuable to understand more about the impacts on job seekers who do not participate in these programs.

1Many measures of job quality are still up for debate [29]. For example, informal work, sometimes used as a proxy for poor job quality, has some benefits relative to formal work, including more flexible working arrangements and lower taxes [29]. One study in Ethiopia found that a program that increased permanent employment, often used as proxy for good job quality, did not increase job satisfaction [3]. Other studies that have shown positive impacts on “job quality” have not shown any increase in labor earnings [29].

Beam, Emily A. 2016. “Do Job Fairs Matter? Experimental Evidence on the Impact of Job-Fair Attendance.” Journal of Development Economics 120 (May): 32–40. Research paper