How can RCTs help us reduce violence and conflict? 2021 update 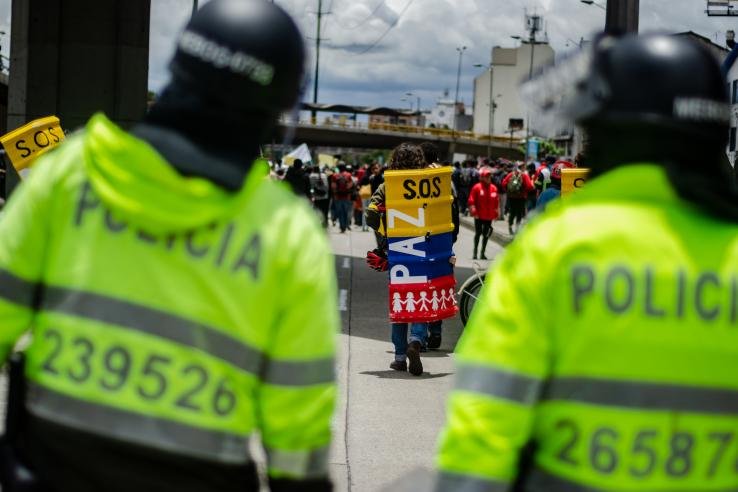 In March 2020, UN Secretary-General António Guterres called for an immediate global ceasefire, urging armed parties worldwide to lay down their weapons as the world turned its attention to combating the Covid-19 pandemic. While overall conflict incidents and fatalities have declined since, widespread incidents of political and social violence continue to pose serious threats to global stability.

Over the past year, in Ethiopia, India, Mozambique, Myanmar, and, most recently, in Israel and Palestine, conflict has reignited or escalated; in Brazil, Colombia, Nigeria, and the United States, high-profile instances of police brutality and targeted violence have deteriorated citizen trust in the state; and in households worldwide, a “shadow pandemic” has emerged as intimate partner violence has increased, coinciding with strict lockdown measures. These are just a few examples of how conflict has persisted throughout the past year despite a global halt to most other activities (for more, see the Armed Conflict Location & Event Data Project’s recent report on the impact of Covid-19 on global conflict and demonstration trends.)

Recognizing the combined social, economic, and personal toll of crime, violence, and conflict globally, are we learning enough from evaluations of strategies to address these phenomena?

Encouragingly, the evidence base is growing. Emerging research is enabling us to explore innovative strategies—beyond just traditional policing and security sector interventions—to respond to the myriad factors that may lead to crime and violence in our communities. These innovations are more important now than ever as we grapple with pressing questions on how to reduce police bias and excessive use of force, restore trust between citizens and the state, and promote cohesion and understanding across ethnic and social divides.

Emerging lessons from the Governance, Crime, and Conflict Initiative

In 2017, the UK’s Foreign, Commonwealth & Development Office (formerly the Department for International Development) challenged J-PAL and Innovations for Poverty Action (IPA) to expand the evidence base on effective conflict and violence prevention programs. The result was two major research initiatives, the Crime and Violence Initiative and the Peace and Recovery Program (both encompassed under the broader Governance, Crime, and Conflict Initiative or GCCI).

Since launching these initiatives, we have sought to document what we have been learning from randomized evaluations on various topics—from policing to peacebuilding—and to highlight existing evidence gaps. Today, we are excited to share a second edition of the GCCI Evidence Wrap-up (originally released in 2019), which seeks to capture this growing evidence base. Some of the key additions and revisions of the 2021 edition include:

For a snapshot of some of these key updates, expand the sections below.

The new edition of the GCCI Evidence Wrap-up divides the evidence on effective policing into two main sections:

1. How can we better allocate and deploy police resources? Acknowledging that crime and violence are highly concentrated, and that police have limited resources available to them, the first section has been reoriented to focus on strategies for efficiently deploying and allocating police resources. This includes experimental evidence on policing high-crime areas, improving police engagement with communities, shifting offender behaviors, and combating organized crime.

For example, a recent study by Sabrina Karim (Cornell University) in Liberia demonstrated how facilitating face-to-face contact between police and communities traditionally governed by customary (rather than state) authorities can improve perceptions of state legitimacy, increase crime reporting, and raise demand for police services.

Further, a study by Anna Wilke in South Africa found that connecting crime victims with the police through an alarm system improved local reliance on and perceptions of the police, while reducing willingness to engage in vigilantism.

2. How can we better train police? The second section recognizes the importance of building police capacity on their ultimate ability to tackle crime and maintain collaborative relationships with the community. Recent research examines ways of developing police capacity by diversifying police teams to be more responsive to communities’ needs and by implementing skills-based trainings. For example, Rodrigo Canales (Yale University) has been working with Mexico City’s police force to evaluate the impact of a three-day procedural justice, police legitimacy, and leadership training program on the effectiveness, perceptions, and behavior of officers.

Further, a new subsection on countering police violence acknowledges the damage police violence and excessive use of force has on individual lives, public safety, and the perceived legitimacy of the police. To combat police violence, researchers have evaluated strategies utilizing police monitoring devices, procedural justice, and implicit bias trainings, though this research has largely been concentrated in the United States. Ongoing GCCI-funded research in India, Pakistan, Brazil, and Colombia will contribute to our understanding of effective policing and relationship-building strategies.

For communities emerging from conflict, effective systems of dispute resolution are an essential part of maintaining a lasting peace and preventing future violence. However, formal institutions for justice provision and dispute resolution are often inadequate, overburdened, or non-existent, often resulting in citizen distrust in the state.

In such contexts, researchers are exploring different methods for (re)building citizen trust in state institutions. For example, in a lab-in-the-field experiment in Pakistan, Daron Acemoglu (MIT) and coauthors found that providing information about reduced delays in state courts led citizens to report higher willingness to use these formal institutions and greater trust in the state. When citizens received positive information about the state, they were also less likely to report future plans to use non-state actors in resolving disputes. These findings suggest that simple informational primes can play an important role in shifting citizen attitudes and beliefs about both state and non-state justice systems.

There is also the risk that institutions—both formal and informal—may systematically produce outcomes that favor particular segments of society over others, leading to questions about how best to ensure equal access to justice and procedural fairness, particularly for vulnerable and marginalized groups.

In Bougainville, Papua New Guinea, Jasper Cooper (University of California, San Diego) finds that customary dispute resolution mechanisms and state forces may appeal to men and women in very different ways, particularly when it comes to addressing gender-based violence. Similarly, in Liberia, Robert Blair (Brown University) and coauthors find that increases in crime reporting—resulting from a community policing intervention—came almost entirely from those generally found to be disadvantaged by customary forms of dispute resolution.

Since first publishing the GCCI Evidence Wrap-up in 2019, the literature on peacebuilding, reconciliation, and post-conflict recovery has grown across many dimensions, perhaps most notable of which is an expansion in research on intergroup contact. This approach builds on decades of social psychology research on prejudice reduction. However, until recently, there has been relatively little experimental evidence on whether contact interventions are an effective means of altering how individuals interact with one another in contexts experiencing or recovering from conflict.

Recent research from Afghanistan, India, Iraq, and Nigeria is furthering our knowledge of whether and how contact works to shift attitudes and behaviors in conflict-affected contexts. For example:

While recent work has started to shed light on how contact can alter the ways in which groups view one another and the extent to which they are more tolerant of each other in conflict-prone contexts, additional research is needed to discern whether these efforts ultimately translate into lower levels of conflict or higher degrees of cooperation and collaboration among groups. (For more on open research questions, see the ‘deep dive’ in the evidence wrap-up.) Ongoing research on various intergroup contact approaches in Jordan, Lebanon, and Nigeria will begin to fill in some of these gaps.

Gender-based violence (GBV) and intimate partner violence (IPV) pose major global health and policy challenges. The WHO estimates that one in every three women have suffered physical or sexual violence by an intimate partner in their lifetimes. Most recently, the Covid-19 pandemic has led to a spike in reported cases of domestic violence.

With the goal of supporting policymakers and practitioners seeking to identify effective measures to address this urgent issue, this new edition of the GCCI Evidence Wrap-up includes a full chapter on what we know about reducing violence against women (VAW). In this section, we discuss three main areas of research that can contribute to policy design:

1. Shifting social norms: A growing body of evidence has focused on shifting social norms associated with the acceptance and perpetration of VAW, including through gender training, couples’ dialogues, and media campaigns. In Ethiopia, for example, the Unite for a Better Life program (a gender-transformative skills-building program) increased support for gender equitable attitudes, promoted more gender-balanced behaviors, and reduced IPV by up to 50 percent when delivered to groups of men, highlighting the importance of involving men in such interventions.

2. Increasing access to economic resources: Theory suggests that providing women with access to economic resources—such as cash transfers, microcredit, savings groups, or employment—may alleviate familial stresses and increase women’s bargaining power within the household, thereby reducing intrahousehold conflicts and risk of violence. However, evidence on the effectiveness of these programs remains mixed. Studies from Bangladesh, Burkina Faso, Côte d’Ivoire, and South Africa suggest that economic interventions may be more effective when paired with gender-transformative approaches, which offer complementary opportunities to address underlying issues—such as unequal decision-making power—that might affect women’s risk of violence.

3. Equipping institutions to better respond to VAW: Researchers have also been exploring ways to improve strategies deployed by the justice system and state security institutions in responding to this form of violence. Two ongoing GCCI-funded studies in India are evaluating police efforts to increase the representation of female officers in dedicated public-facing roles in Madhya Pradesh, and leverage hotspots street patrolling to target VAW in public spaces in Hyderabad. (Watch a recent webinar on this research and its policy implications.)

For much more on all of the above themes, including study snapshots, emerging insights, and open questions, we encourage you to browse the full wrap-up.

We see this wrap-up as a living document that we will periodically update as the evidence base expands. If you know of high-quality, randomized evaluations that have been completed on these themes that you think we should include or if there are key themes you think are missing, please let us know. Moreover, if you wish to consider whether a program or intervention may be suitable for a randomized evaluation, or whether the evidence reviewed potentially offers relevant insights for new program design in a specific area, please get in touch by emailing [email protected]. 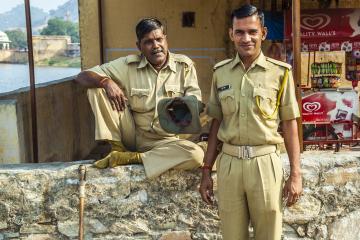 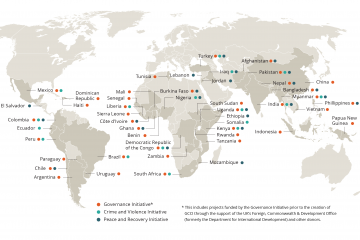 Pushing the boundaries of governance, crime, and conflict research: Innovations in research, measurement, and design 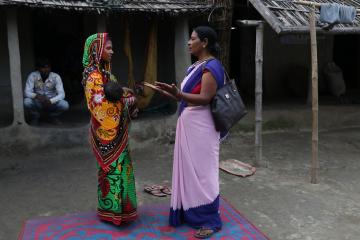