How can we design more effective social programs across Europe? J-PAL affiliated researchers focus on the contribution made by randomized evaluations to the development of high-quality evidence for informing social policy.

To date, researchers in our network have conducted over 80 ongoing or completed randomized evaluations of social programs and policies across 20 European countries, with a particular focus on the education and labor market sectors.

Here we highlight a selection of insights generated by these studies over the past decade. 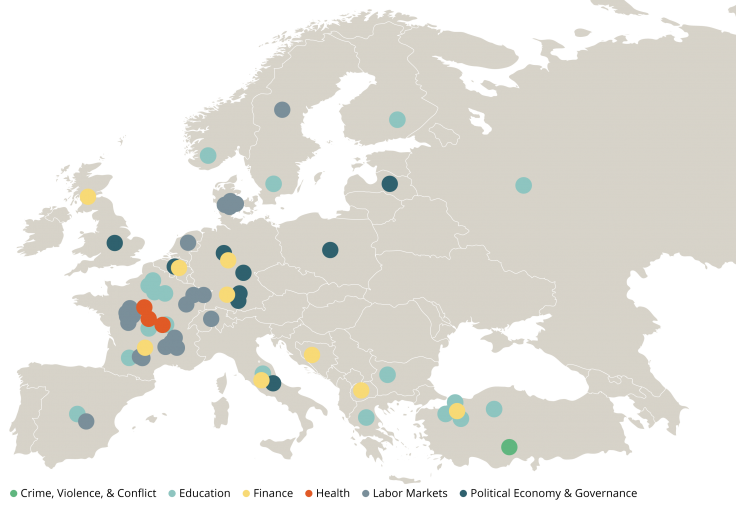 Research conducted by J-PAL affiliates in Education in Europe has focused on narrowing the achievement gap for students from poor or marginalized backgrounds, including through promoting access to high-quality education for all, helping children develop skills associated with improved learning, increasing access to information about educational opportunities for both children and parents, and providing targeted remedial education to help students catch up as needed.

Children from economically disadvantaged backgrounds or regions often have access to fewer resources—in and out of school—for academic success, and those from immigrant or minority backgrounds may face additional barriers. These factors can become obstacles to obtaining quality employment opportunities later in life.

A growing body of randomized evaluations has sought to understand what forms of targeted interventions can help better connect these students to school resources in an effort to improve learning outcomes and promote social mobility. A recent review of experimental evidence on tutoring programs from North America showed that tutoring generally led to large improvements in student learning, particularly for students in earlier grades and when conducted during school by teacher or paraprofessional tutors.

1Sacerdote, Bruce. 2011. “Peer effects in education: How might they work, how big are they and how much do we know thus far?” In Handbook of the Economics of Education, ed. Eric Hanushek, Stephen Machin, and Ludger Woessmannno, 3:249–277. Elsevier. doi: https://EconPapers.repec.org/RePEc:eee:educhp:3-04.

Researchers are increasingly exploring the role of non-cognitive skills—such as patience, self-control, and perseverance—in driving successful performance at school. Recent work has shown that these skills are indeed malleable in children and adolescents, and new evaluations are helping us understand how development of non-cognitive skills may help children perform better in certain learning tasks, set higher aspirations, and exert more effort in learning. These interventions tend to have generally small, yet positive impacts, often at low costs.

Increasing access to information on schooling to improve student learning

Providing information about schooling and encouraging parents to be more involved in their children’s education can be a highly effective, low-cost way to help students and their parents set more realistic expectations. However, the content of the information and student characteristics such as academic standing may be an important determinant of effectiveness for these programs.

Extensive research from other regions, including the United States and India, has shown how tailoring instruction to students’ learning levels—regardless of grade level—can be a powerful tool for helping narrow the attainment gap for students who have fallen behind. New research in France is evaluating different models for offering intensive learning support at different schooling levels.

Research by J-PAL affiliates has evaluated the impact of financial services and products in helping households smooth consumption, make investments, and manage risk. Many of these studies have drawn on interventions evaluated in low- and middle-income countries elsewhere and sought to test their applicability in Europe. A separate stream of research has explored how changes to the ways that charitable organizations raise money can lead to increased donations.

Cash transfers, microcredit, and targeted remittances are financial management tools that can be useful in helping households face unexpected expenses and take advantage of opportunities.

Despite its potential to expand access to credit for low-income borrowers, traditional microcredit has not had a transformative impact on borrowers’ income and long-term consumption on average.

Remittances are one of the largest types of international financial flows to low- and middle-income countries and have been shown to improve educational outcomes of migrant workers’ relatives, as migrants tend to spend a large part of their income on the education of relatives back home.

Targeted cash transfers are another tool for reducing poverty and influencing household spending that have been evaluated in many contexts around the world. This global evidence suggests that the impact of these payments may depend in part on who in the household receives these payments.

Consumer protection remains central to financial inclusion efforts to ensure consumers can select and use the most appropriate financial products. However open questions remain on how consumers make financial decisions and how best to protect consumers.

Charitable organizations often rely on private donors to support activities that may advance the public good. How can choices charities make about how they ask for donations impact the amount of funds they are able to raise?

J-PAL affiliated researchers in Europe have evaluated a range of interventions designed to contribute to women’s empowerment, including through efforts to improve soft skills to reduce gender gaps among school children, provide cash transfers to increase women’s decision-making power, and promote gender equality in hiring.

European governments face an array of challenges related to labor markets, from a rising unemployment gap between persons with lower and higher levels of education, to large discrepancies in long-term unemployment rates across different European countries, to the rapidly changing nature of jobs.7 Many of these challenges are likely to grow in the wake of the Covid-19 crisis. To identify potential lessons to some of these challenges, J-PAL affiliates have conducted rigorous evaluations of programs aiming to help jobseekers (re)enter the labor force, foster skills in entrepreneurship among youth, increase demand for labor, and reduce discrimination in hiring.

Job search assistance programs have generally been shown to be effective in improving employment outcomes for jobseekers in high-income countries, but questions remain about how to best structure this assistance. By partnering with public employment agencies across Europe, researchers have sought to answer what forms of assistance—and how much—jobseekers need.

Job search assistance: How to deliver most efficiently?

Evidence from two studies suggests that where available jobs are scarce, job placement programs may have unintended displacement effects: The recipients of these services may obtain jobs at the expense of non-participants, leaving the latter potentially worse off than before the program.

Another policy strategy to increase employment may be to stimulate firms’ demand for labor through interventions that target firms’ recruitment costs. Efforts to trigger increased demand in markets where it is low may be an alternative strategy that is potentially more cost-effective and less likely to create negative displacement effects as some job search assistance programs mentioned above.

Research suggests there are many instances of hiring discrimination against minority and underrepresented groups on the basis of factors such as race, ethnicity, immigration status, gender, religion, and sexual orientation. Randomized correspondence studies, in which researchers send out fictitious resumes to job openings to test responses, have found cases of discrimination in a number of European countries, including Czechia, France, Germany, Ireland, Italy, Sweden, and the Netherlands.

One proposed policy response to address this kind of hiring discrimination has included removing identifying information from job applications, but the impact of such measures appears to depend on the characteristics of hiring firms, namely whether they were discriminating against minority groups in the first place.

Research by J-PAL affiliated researchers in Europe in the Political Economy and Governance sector has focused on evaluating measures to increase electoral participation across Europe as well as how simple tweaks to how governments collect taxes can increase compliance.

To identify potential mechanisms to improve voter participation in Europe, a number of studies have measured the impact of various partisan and nonpartisan information campaigns on citizens’ electoral participation, including voter registration, turnout, and election results.

Despite being the main source of national revenue and of funding for public goods, tax is often imperfectly collected. To help countries increase tax compliance, a series of studies have tested the effect of shifting how their communications are framed and simplifying steps for compliance.

Efforts to promote social inclusion can take many forms: from programs to reduce obstacles to educational achievements for children, to labor market policies focused on improving the employment prospects of all, and to measures to better meet the health and housing needs of disadvantaged communities.

In launching the European Social Inclusion Initiative in 2019, J-PAL Europe reviewed a broad range of evidence generated from evaluations of different programs and policies designed to help break the intergenerational transmission of poverty. A short four-page summary of the review's key insights and priority research questions can be found here.

To learn more about our work on social inclusion, see our European Social Inclusion Initiative page.