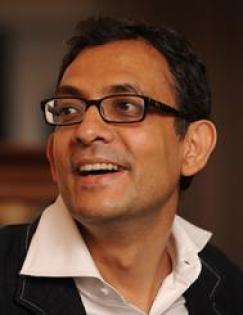 Abhijit Vinayak Banerjee was educated at the University of Calcutta, Jawaharlal Nehru University and Harvard University, where he received his Ph.D in 1988. He is currently the Ford Foundation International Professor of Economics at the Massachusetts Institute of Technology. In 2003 he founded the Abdul Latif Jameel Poverty Action Lab (J-PAL) along with Esther Duflo and Sendhil Mullainathan, and remains one of the directors of the lab.

Abhijit is the author of a large number of articles and five books, including Poor Economics, which won the Goldman Sachs Business Book of the Year, and Good Economics for Hard Times, both co-authored with Esther Duflo. He is the editor of three more books and has directed two documentary films. Banerjee has served on the U.N. Secretary-General’s High-level Panel of Eminent Persons on the Post-2015 Development Agenda. He is a trustee of Save the Children USA and the Chair of the Global Education Evidence Advisory Panel and the Global Advisory Board for Covid-19 Response of the government of West Bengal.

Note: Abhijit Banerjee does not have any social media accounts, including Twitter, LinkedIn, Facebook, or Instagram. Any accounts bearing his name on those platforms are imposter accounts.

5 result(s)
Where Credit is Due
Empowering Citizens with Information: Improving Access to Social Assistance in Indonesia
Incentives for Immunization
Making Schools Work for Marginalized Children
Why Aren't Children Learning?